Unipart to start moving fuel rails to China for Ford 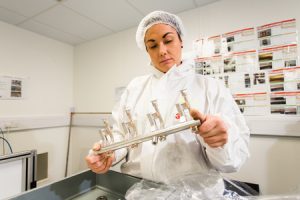 Unipart Manufacturing has signed a seven-year contract with Ford to supply engine components to its joint venture Changan Ford plant in Chongqing, China.

The components maker will supply the operation from its Unipart Powertrain Applications site in Coventry, UK, with fuel rails – part of the common rail fuel injection system used to feed fuel into the engine under high pressure. Supply will begin in 2018 and will mean a 50% increase in production at the Coventry site and the addition of 40 jobs.

The contract will leave the Coventry site exporting 95% of its output to customers in China and mainland Europe. It is not clear at this stage whether Unipart Group’s own logistics division will be handling the movement of the parts between the UK and China but it already carries out a wide range of logistics operations in China operating across 13 sites, including in Beijing and Shanghai, for customers such as Jaguar Land Rover, McLaren and Tesla.

Unipart said one of the main reasons for winning the contract was its ability to remove around 15% of the cost of the original design of the fuel rail without losing any quality or performance.

"China is an important market for our manufacturing business as it's the largest global market for new car sales with around 21m being sold [annually] and 25m being produced,” said John Neill, Unipart’s chairman and group chief executive. "Competing on such a global scale requires the highest levels of productivity, use of the most advanced technologies and the continual development of highly trained, highly engaged people who will go the extra mile for customers.”