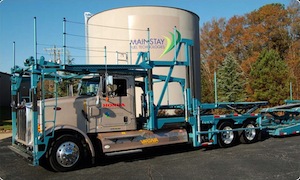 The CNG car carrier fleet will be deployed to move finished vehicles from the Lincoln plant to a new rail facility at Talledega, which is operated by CSX, for onward distribution in the US. According to Virginia, Honda will ship between 1,200-1,400 vehicles per day from the plant to Talladega for movement by rail to the dealer network. The company said it could increase the CNG fleet to between 40-50 units.

Virginia Transportation Corporation has developed the CNG fleet at the behest of American Honda.

“The CSX railhead is new and we took the opportunity to request that our carrier transition to CNG-fuelled carriers manufactured specifically for this shuttle operation,” a spokesperson for Honda told Automotive Logistics.

Along with Honda, Virginia worked with a number of partners on the development of the equipment, including Mainstay Fuel Technologies, Peterbilt (and The Pete Store), as well as car carrier equipment manufacturers and providers Cottrell and Fontaine Modification.

The latest development follows Honda’s establishment of a CNG refuelling station in Troy, Ohio in October last year. That station, which was again built by Trillium CNG, is near Honda's parts consolidation and distribution operations but also serves CNG-fuelled passenger cars.

Honda also opened of CNG fueling station adjacent to its Marysville assembly plant in Ohio in April last year to promote the use of natural gas-powered trucks for the delivery of parts in the region.

Despite the historically low price of oil, other carmakers have also been making moves to introduce more CNG-powered trucks into their inbound and outbound logistics chains. At the end of last year, Toyota Transport, the in-house car carrier fleet for Toyota in the US, introduced a CNG-powered truck in a trial for use in southern California.

Fiat Chrysler Automobiles, meanwhile, has made one of the most significant forays into using natural, completing a $40m investment at the end of last year to build a refueling station in the Detroit area and converting to CNG its entire fleet of 179 trucks based in Michigan making deliveries of inbound parts.