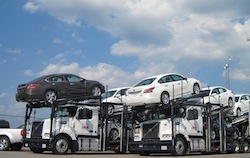 The introduction of new hours-of-service regulations for truck drivers brought in by the United States Federal Motor Carrier Safety Administration (FMCSA) in July this year is causing concern for vehicle carriers operating across the country.

One of the main concerns is the provision stating that drivers who have reached 70 hours of driving in a week can only resume if they rest for 34 consecutive hours, including at least two nights between the hours of 1am and 5am.

The FMSCA said the rules are designed to improve safety on US roads by reducing truck driver fatigue and limiting the maximum average working week for truck drivers to 70 hours, down from the previous limit of 82 hours, including an 11-hour daily driving limit.

While safety is an uncontested concern for the industry, these mandated ‘reset’ timings risk taking drivers off the road and reducing the hours they can work, according to members of the Auto Haulers Association of America (AHAA). They are also limiting the flexibility of haulier schedules.

AHAA was set up last year to share information and best practices for improved operational performance amongst small to medium-sized car carriers in North America.

According to the FMCSA, only the most extreme schedules will be impacted, and more than 85% of the truck-driving workforce will see no changes. Moreover, FMCSA administrator Anne S. Ferro said the industry stands to benefit from $280m in savings from fewer truck crashes and $470m in savings from improved driver health. “Most importantly, it will save lives,” she added.

While the FMSCA highlights the potential savings, there are also potential costs to consider, according to Mark Hopkins at Hanson and Adkins, an AHAA member. He pointed out that the main way around the legislation was to have more drivers and more equipment – “more resources that are not contributing anymore work” as he put it.

With a shrinking pool of drivers and capacity tight as US vehicle production continues to grow, there are challenges ahead. But the AHAA is trying to foster some creative thinking as well.

Resets are too rigid

Kirk Williams, president and CEO at Proficient Auto Transport, said that the consecutive rest periods could not effectively be done in the middle of the week because it meant the loss of two days of work. “It is definitely taking more drivers off the road at key times and it takes away flexibility,” said Williams. “That is the experience we are having and it is a very busy season, so there is an impact.”

Under the previous system, resets could be carried out at different times in the week, according to Williams. “What we are trying to do now is get these guys back in on a Friday so they have Friday and Saturday night, and Sunday afternoon they can get in, load up and be there first thing Monday morning,” he said. While some dealers take deliveries on Saturday, most are closed on Sundays so drivers are unlikely to be making deliveries on those days.

The new FMCSA rules also demand a 30-minute break in the first eight hours of a shift, although the US Court of Appeals recently overturned this rule for short haul drivers. For longer hauls, however, it is also having an impact on flexibility, though drivers are being encouraged to use this period for a lunch break, something Hansen and Adkins, which works on a more regional basis, is advocating.

For many working in the car haul industry, it seems that the business is now as regulated as it was before deregulation took place in the early 1980s, something that carriers have complained is making it difficult to recruit drivers at a time when they are desperately needed. The list of dos and don’t’s for drivers is getting longer, according to AHAA members.

Moreover, many in the general logistics industry claim that driver safety was improving considerably under the old system. According to the American Trucking Association, which had appealed against the hours-of-service regulations, they were not scientifically backed up and had more to do with “agenda driven lawmaking”.

The ATA also questioned the use of scientific data in justifying the new regulations, suggesting the safety data cited did not support the changes.

This is also the view of AHAA members, who agreed that safety levels had improved dramatically since the last changes. “[The government] said this is what we think and enforced the law; I don’t think it was based on science,” said Williams.

According to Tom McGeehan at haulier TJ McGeehan, the industry is now going to be limited in its ability to react to change.

“We are not like the other industries out there that have a consistent flow of freight everyday or month,” he said. “There is seasonal fluctuation and so forth. You try to manage your resources according to what comes your way and what this does is make things a lot more challenging to address.”

Any attempt by a driver to stretch the rules is going fall foul of the presence of electronic onboard recorders (EBORs), which are also being mandated across the haulier industry.

“There are a lot of folks out there that have built their business model on the way things are today,” said Hopkins. “They won’t be able to accomplish the same levels of productivity that they are able to today and that will have a dramatic impact.”

So how should the carrier industry deal with the new regulations? The first thing, according to Tom Ogrodowski, business development manager at Brothers Auto Transport, is make sure that OEM customers understand what the changes mean for the industry.

“We need to convey the message so the customer understands that as the flexibility is taken away from us, we will not be able to serve them with that flexibility,” he said.

However, most carriers agreed that unless there is a direct benefit to the carmakers it will be up to the car carriers to find a way through the challenges ahead.

“As long as they do not see any change to their service level, they are not going to change their behaviour,” said Ogradowski. “I don’t see them taking a proactive step.

The last time he saw one was when the Transport Act in the early 1980s, which changed the length and height of trailer equipment. Since carmakers saw that as being to their advantage, many advanced funds to carriers for investment in new equipment. “I’ve not seen anything since then that would indicate the shippers are proactive or want to be,” Ogradowski admitted.

Where the carrier industry can be proactive, however, is in the way it recruits drivers to meet the increased need, something the AHAA is now looking into. According to Tom McGeehan, it is about encouraging quality drivers into the car haulier sector from other areas, including the military.

Deploying those drivers in new ways is also something the industry is discussing, including the possibility of ‘relay’ style scheduling, where drivers would work on particular regional routes, passing on the truck and equipment to the next driver for the onward journey. The idea requires more management coordination and could mean more investment in equipment, but it is a sign that carriers are rising to the challenges the FMSCSA rules have thrown at them.

“Thinking out of the box [is] what we’ve got to do as an industry,” said Williams. “We have got to address current situations and think differently.”