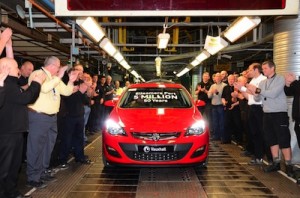 GM’s Vauxhall division in the UK has announced that its Ellesmere Port plant has manufactured its five-millionth vehicle in the shape of a red Astra hatchback. The plant is gearing up for the production of an all-new Astra later in 2015.

Production at Ellesmere Port last year reached almost 73,500 ranking it number seven in terms of UK output and the company said the plant is on par to hit that volume again this year. Of that figure, 76% were exported out of the UK. This is roughly in line with the UK average in which up to 80% of the vehicles made in the country are for export.

Ellesmere Port is taking on an additional 300 staff next month as part of a £140m ($219m) investment by GM, which will secure the plant’s future into the middle of the next decade, according to the company.

The plant celebrated its 50th anniversary in June this year.