In the service of free trade

Free trade zones offer many tax and logistics benefits to the automotive supply chain. DP World, with its flagship facility in Dubai, UAE, wants to expand these services in markets in the Middle East and Africa, the UK and the US 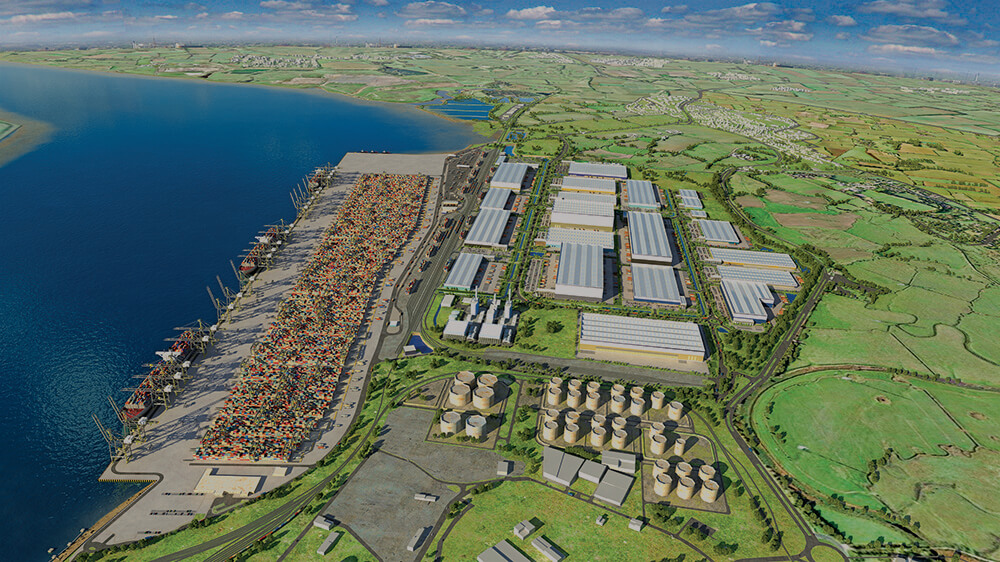 Many of the most successful examples, such as Jebel Ali Port in Dubai, Singapore and Shanghai, are also integrated into logistics networks and industrial clusters.

Such Special Economic Zones (SEZs), as they are also called, have grown dramatically in the past 30 years, notably in emerging economies with otherwise protective import and trade regimes. For the automotive industry, where slow-moving bureaucracy can put a hard brake on just-in-time flows, SEZs have been attractive for setting up distribution and modification centres for vehicles and spare parts, helping to reduce inventory and trade costs.

Today, changing technology, regulations and markets look set to transform the value and relevance of such SEZs again. In emerging markets, including those in many parts of Africa, it is now more vital that such zones are part of wider international economic strategies that can tap into local skills, services and logistics. For industries like automotive, it rarely makes sense to develop supply chains in isolation.

SEZs are also enjoying new opportunities, as advanced economies in North America and Europe show more interest in developing such areas, both to deal with trade rules as well as to connect new, high-tech value chains. For automotive, this could include the growing complexity around electric vehicle and battery supply chains.

Whilst SEZs have long been centres of logistics and light assembly, there is also more potential to exploit their benefits for vehicle production, whether for new vehicle technology or in establishing new manufacturing centres in expanding markets such as the Middle East and Africa.

A global growth story
Free trade zones have existed for decades. The first ‘Export Processing Zone’ was established in 1947 in Puerto Rico to serve the US. It included exemptions from US income taxes for a decade and offered users pre-built warehouses and factory shells. In the late 1950s, Ireland’s Shannon airport was also designated as the first ‘free zone’ with duty-free and export incentives.

Such zones have expanded in line with global trade, with automotive playing a key role. Today, the World Free Zones Organization (WFZO) estimates that there are more than 2,200 SEZs globally employing 100m people.

Such zones have played a big role in the Chinese economy for the past 30 years, for example, and now number around 130. Since it was set up in 2013, the China Pilot Free-Trade Zone in Shanghai has processed trade volumes worth more than $100 billion.

The Middle East and Africa have seen a recent rise in SEZs, too. South Africa has expanded the Coega SEZ in Nelson Mandela Bay, home to an FAW vehicle plant. In Morocco, which has a national strategy to create more free zones, there has been investment at the port of Tangier, another important automotive hub.

There are more than 47 free zones in the United Arab Emirates alone, according to the WFZO. One of the largest and most significant areas in the region is the Jebel Ali Free Zone (Jafza) in Dubai, which now encompasses Jebel Ali Port and the new Al Maktoum International Airport, serving more than 7,500 companies. 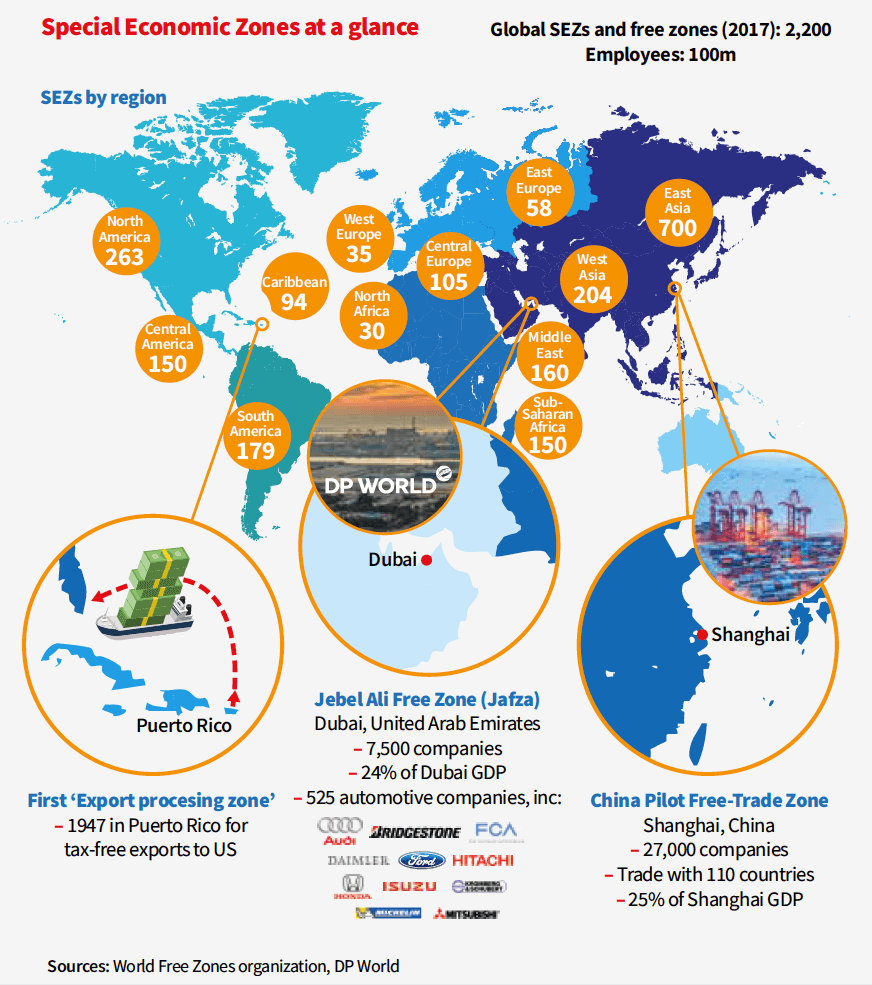 The scope of free trade zones varies significantly, from those centred around specific sectors to domestic market access or export-oriented growth. According to Charles ‘Chuck’ Heath, chief operating officer of DP World’s parks, logistics and economic zones vertical, who has worked to create many, the key ingredient for successful free zones is to encourage investment and trade through a stable regulatory environment, coupled with investment and business services, readily available facilities and a competitive cost for doing business, with the strategy forming part of the national economic agenda.

“In the ideal scenario, the regulatory framework has to be supported with the establishment of an SEZ authority with wide ranging power to oversee a national strategy,” says Heath. ”They need to include ’one-stop shop’ services as well as ensure compliance within the zone. DP World will work very closely with our partners in the development and operation of their SEZs.”

Despite the need for government support, Heath suggests that SEZs are more customer-centric when public-private partnerships or private entities manage operations, rather than them being purely in government hands.

Jebel Ali is again a leading light. DP World, which is owned by the government of Dubai but operates as a private company, coordinates closely with both UAE authorities on taxes and infrastructure investment, plus investors and developers.

The future of automotive trade
This model has attracted automotive companies, with the number of manufacturers, tier suppliers and distributors in Jebel Ali growing sevenfold in the last ten years to more than 500 companies, according to Heath. Most lease warehouse space or contract with 3PLs in the free zone to manage their supply chain operations across the Gulf.

Hellmann Logistics, for example, runs parts distribution centres on behalf of Volkswagen Group and Ford’s Middle East divisions. Jafza owns the warehouse that Volkswagen operates, and leases it to Hellmann. For Isuzu, DP World developed a built-to-suit warehouse, which is operated by Nippon Express.

For DP World, which operates nearly 80 port and inland terminals globally, developing such automotive services in and around SEZs and industrial parks is a strategic offering, both at Jebel Ali and at other locations.

While emerging markets are a major focus, the company is expanding logistics parks in the UK and the US into full-service trading zones. For example, DP World has acquired a land bank in South Carolina, already a growing centre of premium automotive manufacturing and exports.

With the uncertainty over Brexit, there is interest in establishing free trade zones to support future trade. DP World’s London Gateway port, one of the largest private infrastructure projects in Europe over the past decade, could emerge as a potential location for such activities. It already has the customs clearance facilities and infrastructure in place, including 835,000 sq.m of logistics park, dedicated rail services and tracks, and close access to the UK’s major markets.

All of these locations have significant potential for automotive. London Gateway, for example, would be well suited for service parts distribution centres or value-added vehicle customisation, facilities in which DP World already has considerable experience in leasing and developing, especially in Dubai.

Manufacturers might also consider hosting high-value vehicle and component production for domestic or export purposes in such locations. One growth area could spring from vehicle electrification, the supply chains for which encompass new geographies and complex rules for shipping lithium batteries and fuel cells. As carmakers connect this value chain to existing production and look to get products to market faster, they will require robust logistics connections, access to skilled labour and services to manage complex regulations. A well-designed SEZ could help satisfy all these requirements.

For DP World, free zones and logistics parks like Jebel Ali and London Gateway will help sectors such as automotive not only because of their fiscal advantages. They need to be at the centre of a wider mix of benefits that includes access to cluster bases and logistics services, industry-specific expertise at both national and international levels, as well as synergies between businesses operating within their boundaries. As vehicle technology and requirements change, such engagement will become even more important.