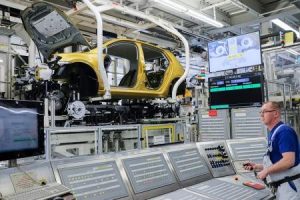 Volkswagen has announced a major €22.8 billion ($26.7 billion) investment programme in its plants around the world to prepare them for modular production and for an electric vehicle offensive in the coming years.

The main focus will be on Germany, which will account for investments totalling €14 billion. A big part of this will be transformation of the Zwickau plant into a pure e-mobility facility, with an investment volume of about €1 billion.

At Emden, €1.1 billion will be spent to ready the plant for production of the Passat range from the end of 2018.

In the first stage of its electric vehicle plans, Volkswagen will be basing series production of its vehicles on the new modular electric drive kit (MEB) there.

In 2020, the Volkswagen ID will be launched – the first vehicle in the new generation of electric cars.

The MEB drive system will be assembled at Kassel, with Salzgitter providing MEB components and hosting a pilot plant for battery cells and cell modules.

Volkswagen is investing more than €750m in Brunswick, about €1.5 billion in Kassel and more than €800m in Emden.

“The MEB will allow Volkswagen to offer electric vehicles with operating ranges from 400km to 600km, rapid charging capabilities and major package benefits, at the price of a comparable diesel car,” said the company in a statement.

The new vehicle generation will be launched at almost the same time in Europe, China and the USA. In 2020, the production volume on the launch of the Volkswagen ID will be about 100,000.

Last year, the company also said it planned to base all conventional vehicles on the modular cross-section box (MQB) platform going forward.

This week, the company said its vehicle production plants throughout the world such as those at Pamplona in Spain, Palmela in Portugal and Bratislava in Slovakia, were preparing for the production of further MQB vehicles.

SUV projects are planned for plants in Mexico, the US, South America and Russia.

At the beginning of September, the Volkswagen Group announced Roadmap E, an electrification campaign that will result in about one in four new vehicles produced by the group being a battery-only electric vehicle, equal to as many as 3m electric cars a year.

The company is planning to electrify its entire portfolio by 2030, meaning there will at least one electric variant of each of its 300 models.

It has invited tenders for one of the largest purchasing volumes ever, with plans to spend over €50 billion on battery cells.