Volkswagen looks to export engines and vehicles from Kaluga

Volkswagen is planning to export vehicle engines from its Kaluga plant in Russia to Europe, as well as the launch of global finished vehicle exports, according to the governor of the Kaluga Oblast, Alexei Artamonov. The statement was confirmed by representatives of VW Group Rus, which also emphasised that they expected to receive some support from the country’s authorities. 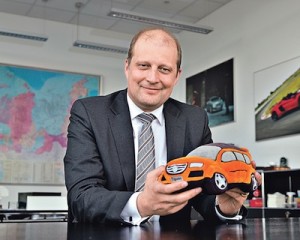 Volkswagen Group Rus opened its new $250m engine plant in Kaluga at the beginning of September. The facility has an annual capacity of 150,000 engines and it is expected that the plant will supply Europe with between 25-30% of all production.

The head of Skoda Auto for Russia and CIS, Miroslav Kroupa, said that full capacity at the plant had originally been planned exclusively for supply of engines within Russia but that the situation changed with the fall in sales in the country.

At the same time, alongside the engines, the carmaker is looking to export finished vehicles, presumably to Europe.

“We are thinking about exporting our cars and it is not easy: there are global export flows, agreements, logistics costs, taxes and customs nuances of the different countries and so on,” Marcus Osegowitsch, head of the Russian division of VW. “This is what Russia should work out technically in order to enable us to benefit from the current exchange rate differences.”

Osegowitsch added that the move did not include exports to CIS countries, which it has already been handling for some time.

“I mean exports in a global sense,” said Osegowitsch. “It is quite a significant challenge for us, which eventually will improve our quality here, in Russia,” he claimed, adding that the Russian government needed to provide VW with support, both legislative and logistical, in its efforts to export cars.

Volkswagen Group Rus’ PR director, Natalia Kostyukovich, also confirmed that the carmaker was considering the prospects for vehicle exports from Russia to foreign countries. "We have not made any decisions in this regard but we are ready to consider the possibility of launching export supplies," she said.

Sources at VW’s Kaluga factory suggested that those considerations were moving along and that the company had completed its estimates on the logistics spend required to export vehicles from Russia to Europe. First deliveries could even be launched before the end of the year.

According to the sources, to begin with VW will export only the Polo from Russia at first but could expand the range next year with a number of other models made at Kaluga.

Recently, Hyundai has announced big plans for the export of vehicles to Egypt from its facility in St Petersburg. Industry commentators indicated that Hyundai’s plant is in a more beneficial position than Volkswagen, being located close to the Baltic ports, which significantly reduces the cost of internal logistics on vehicles and components.

Over the summer of 2015 VW revised its production output from Kaluga because of the poor sales in the Russian market.