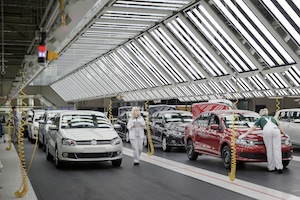 Volkswagen has confirmed it has begun exporting finished Polo sedan models from Russia to Mexico.

A spokesperson for the carmaker said the current economic situation on the Russian market meant VW was “considering all possible export opportunities”. The initial export volume comes to just “a few hundred” he added.

The move follows the interest in exporting from Russia expressed by Marcus Osegowitsch, head of the Russian division of VW, last year.

The cars are made at the Kaluga plant (pictured), 170km south west of Moscow, alongside the Tiguan and Skoda Rapid. VW also manufactures a number of models as semi-knockdown kits there including the Touareg, VW Multivan, Audi A6 and Audi A8. In 2015, Kaluga produced around 97,000 vehicles.

Total VW vehicle exports from Russia are around 10,000 but the carmaker also has a joint venture plant with Russian vehicle maker Gaz in Nizhny Novgorod that accounts for some of that volume.

The Russian car market remains in a major slump. A peak of 3m light vehicle sales in 2012 was down to just over half that level last year at around 1.6m units. Carmakers have been looking at export markets to offset those losses. Hyundai has already begun looking to direct further exports to Egypt, for example, while others, such as Avtovaz, have ambitious targets for exports to a range of markets across CIS countries, eastern Europe and even Asia.

In 2015, VW figures show deliveries of passenger cars to the Russian market only reached 78,400, down almost 39% from the previous year’s 128,100. The OEM was forced to cut back production in Russia last summer because of the continued weak economy and announced it was taking a number of steps to revise output at the plant.

The Russian government recently announced it would provide a budget of 3.3 billion roubles (around $50m) to support the export of cars from assembly plants in the country. The subsidy will help with a variety of logistics expenses, including offering up to 100% to bring cars in line with international standards, up to 80% to cover inland transport costs to the Russian border, and up to 50% for sea transport.