WWL and Eukor resolve alleged breaches of US Shipping Act 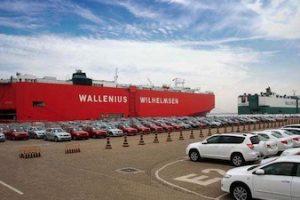 Wallenius Wilhelmsen Logistics (WWL) and sister company Eukor Car Carriers have made a compromise agreement with the Federal Maritime Commission (FMC) that will involve them paying out $1.5m in civil penalties to resolve alleged breaches of the US’s Shipping Act.

The two companies allegedly violated Section 10(a) of the act by acting in concert with other ocean carriers to transport vehicles without filing such agreements with the FMC. FMC staff have alleged these practices persisted over at least five years leading up to September 2012 and involved numerous US trade lanes.

In addition, the agreement resolved allegations that the carriers had failed to file certain space charter agreements or provided transport under certain service contracts that had not been filed.

WWL and Eukor, who have not admitted to violations of the Shipping Act, have agreed to provide ongoing cooperation with other Commission investigations or enforcement actions with respect to these activities.

A spokeswoman for WWL said: “WWL and EUKOR have reached a compromise agreement with the FMC, resolving allegations that the companies acted in concert with other ocean carriers without a filed agreement. WWL and EUKOR are committed to fair business practices and will continue to work with the FMC to this end.”

In July, WWL became the fourth car carrier confirmed to be fined by the US Department of Justice in relation to price-fixing on international ro-ro services between 2000 and 2009, agreeing to pay out almost $100m in fines.

In February, meanwhile, it emerged that the FMC had collected $520,000 in civil penalties from five ocean carriers including Volkswagen Konzernlogistik after investigations into unfair practices.