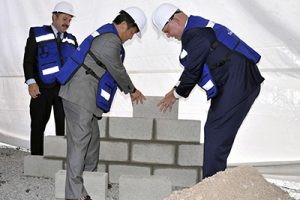 Yusen Logistics has begun building a facility to serve automotive customers near Celaya, in Mexico. The 5,000 sq.m warehouse is located on a 6.9-hectare location in the Amistad Industrial Park, in the Bajio region.

“The automotive industry is growing at a tremendous pace in Mexico,” he explained. “In recent years, a number of major auto manufacturers have invested in large assembly plants in the Bajio area. This is bringing many tier one and tier two suppliers into the region. “Our Bajio logistics centre is an ideal location to support the logistics needs of these companies.”

The Celaya region of Mexico is among a number of areas in the country where road and rail infrastructure is being improved. Earlier this year at the Automotive Logistics Mexico conference, WWL Mexico country manager Roberto Zavala warned that both rail and road capacity in the country would struggle to cope with Mexico’s growing production volumes.

Among the OEMs in the area are Honda, which in 2014 opened a new production facility in Celaya for its Fit and H-RV models, and Mazda, which began output of models including the redesigned Mazda3 compact car at a new site in nearby Salamanca the same year.

Yusen’s new warehouse should be operational by the end of this year.