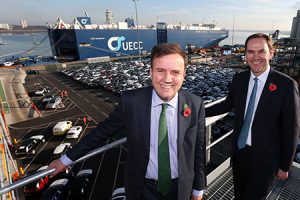 Port operator Associated British Ports (ABP) has officially opened a new vehicle terminal at the port of Southampton in the UK as part of a £50m ($65.6m) investment first announced in September last year.

The Pacific Terminal was opened by the minister of state for international trade, Greg Hands (pictured, left, with Port of Southampton port director Alastair Welch), on November 2nd.

“As the UK’s busiest vehicle handling port, the launch of the new export terminal will move Britain into fifth gear when it comes to world car exports,” said the minister. “This will give a boost to leading British car manufacturers like Jaguar Land Rover by ensuring their cars are able to reach global marketplaces faster.”

The first multi-storey storage facility is now operational at the Pacific Terminal and adds 3,400 additional parking spaces for vehicles being exported via the port of Southampton. A second facility will be added as part of phase one developments at the terminal, bringing the combined capacity to 7,600 spaces.

Phase two of the investment will add another two facilities bring total storage at the terminal to 15,000 spaces. This will leave total storage capacity at the port at 55,000 units across nine vehicle handling facilities.

A spokesperson for ABP told Automotive Logistics the second facility was just being handed over by the construction firm and would be operational shortly, with delivery of the two phase two storage facilities expected in 2019 and 2020.

Last year, the port handled 901,000 vehicles for OEMs including Jaguar Land Rover, BMW and Ford. This year, it is on course to handle 920,000 light vehicle units, according to the ABP spokesperson.

Southampton was ranked Europe’s sixth busiest vehicle handling port last year, the second busiest in the UK behind the port complex of Grimsby, Immingham and Killingholme in the north. However, Southampton handles a greater percentage of export trade.

“Southampton is the UK’s number one port for exports, handling exports worth some £40 billion, and it is the UK’s number one for vehicle exports,” said James Cooper, CEO of ABP. “The port is a critical part of the supply chain for the British automotive industry, providing essential access to global markets. The opening of this terminal will build on this critical role and support our customers’ drive to continue to grow their exports well into the future.”

The latest investment adds to the £32m ABP has already invested in port of Southampton over the past five years to support vehicle exports, including in a new link span for stern ramp ro-ro vessels and £1.2m in an upgrade to its eastern dock rail infrastructure.