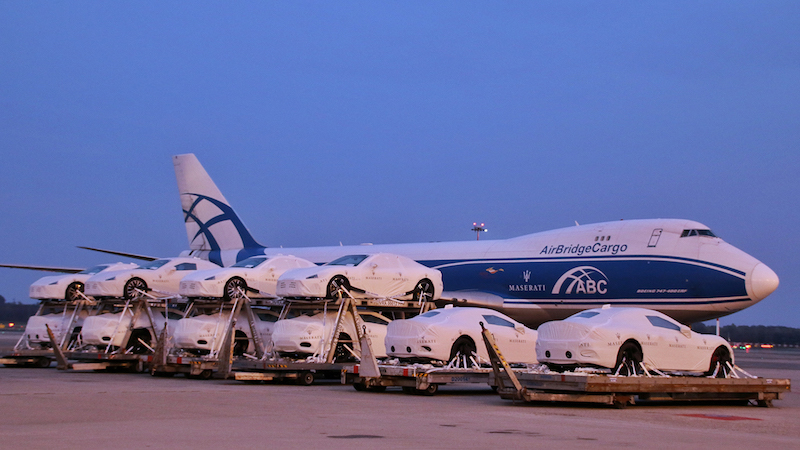 The Maserati cars were loaded onto a Boeing 747 freighter at Malpensa airport in Milan and flown to Narita airport in Tokyo, with a stop en route at Moscow Sheremetyevo airport in Russia.

Following their delivery to Milan the vehicles, which were under protective covers, were loaded by cargo handler Alha Airport MXP, which securely positioned them on double-deck car racks.

On arrival at Narita airport, the Boeing 747 and its cargo were greeted by 300 guests and media representatives who witnessed the unloading. Guests were then invited to attend a welcome reception at the airport, with a formal address from Maserati and the presentation of the cars to customers.

“This is a unique event as it gives each party involved the perfect opportunity to observe vehicle transportation procedures first-hand,” said Sergey Lazarev, general director of AirBridgeCargo Airlines. “We are honoured to be part of this project and to have been entrusted by the delivery of these magnificent Maserati cars. Our abcXL product was developed in close cooperation with our customers for such an operation to combine tried and tested principles with innovative ideas for efficient and reliable deliveries.”

According to AirBridgeCargo, in the first nine months of 2017 the company transported over 45,000 tons of vehicles and automotive spare parts throughout its global network. This represented a 24% year-on-year increase in automotive cargo over the same period in the previous year.

AirBridgeCargo Airlines (ABC) was launched in 2004 as a division of Volga-Dnepr Group to perform internationally scheduled cargo services.