All these tiny flows

Vehicle exports from China have started to rise again, but the volumes are in small batches to underdeveloped markets, making it a tough proposition for major shipping lines and logistics companies. But with imports rising as well, LSPs must rise to the challenge, reports Namrita Chow

The Year of the Tiger began February 14th and with it China hopes that there will be a roaring increase in global demand for its goods. With demand for Chinese cars in the West unlikely to play an important role in the near term, it is the developing economies–the likes of Syria, Algeria and Egypt– that appear to offer the most opportunity for rising demand. In 2009 developed markets such as North America and countries in Western Europe accounted for very low numbers of vehicle exports. In 2009 the United States imported only 7,773 vehicles from China, ranking after markets such as Iran, Libya and Chile.

In 2008 the story was very different. Russia was the big player demanding 84,786 vehicles followed by the Ukraine with 60,247. Demand in Russia and the Ukraine has all but disappeared and markets often overlooked have become the stimuli for future export growth.

But these countries often lack ro-ro ports, while customs and excise systems can be a tangled web of bureaucracy. Demand, meanwhile, is inconsistent at best. Carmakers in China do not have regular shipment schedules to these destinations and will not commit to single shipping lines, instead relying on the spot market, while rarely filling vessels. However, shipping lines realise that winning favour with the Chinese carmakers today could offer a rosy future as global demand rises for Chinese-made cars. 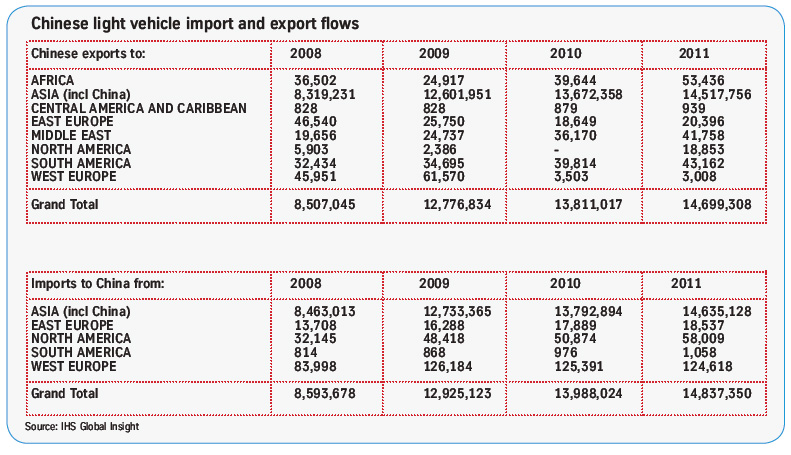 So who handles these shipments to Algeria, Syria and Iraq? According to sources, it tends not be large container lines orcar-carrier companies as ports are often too small to accommodate them. Instead it is the smaller vessels or container lines with greater flexibility that are winning these orders, say executives from several larger car shipping firms, most of whom demanded anonymity citing an increasingly competitive climate.

The orders to these markets are not standardised–it’s a system where freight forwarders find who is going where and when and find a price that matches the carmaker’s budget. As the cars exported to Syria, for example, are budget cars with limited warranty, the price of global shipping lines and their high insurance costs is not what Chinese carmakers want.

Chongqing Lifan Automobile, for example, won an order to deliver its Lifan 520 sedans for use as taxis in Iraq. It exported its first batch of 140 sedans in October 2009. In the same month Lifan Auto opened a sales outlet in Laos. Lifan has also announced plans to set up an assembly plant in Ethiopia as it currently has sales networks in Nigeria and Syria. In 2008 it opened Lifan Motors in Venezuela.

“Geely can’t use ro-ro vessels because the numbers are too small to Central America–in fact they are under 100 units per year so they use Maersk containers,” says a shipping agent who spoke on condition of anonymity. There are almost no ro-ro ports in that region.

A potential saving is also lost by laws in place to reduce grey imports by restricting spare parts being shipped together with finished vehicles. “CBU and spare parts cannot go together so one has to do two shipments as customs will check,” says the agent, who competes for business from carmakers while earning commission from large and small shipping lines. Shanghai General Motors Wuling Automobile (SGMW) makes small minivans and light commercial trucks that are exported to various emerging markets. It uses ships to export to emerging markets. “Usually, we organise vehicle logistics by ship to Africa, Russia and South America,” an official from SGMW says. The carmaker ships vehicles to Vostochiny port in Russia and then by train to the final destination.

“With regard to vehicle export logistics, we first move cars through domestic logistics to the warehouse at the departure port, then we export cars after quality inspection by container terminal and ro-ro ships,” says the official.  As with all SAIC (Shanghai Automotive Industry Corp) subsidiaries and joint ventures, logistics are usually outsourced to Anji Logistics.

Ro-ro vessels continue to build service
One potential exception to China’s export desintations is Australia. Great Wall Motor began shipping vehicles to Australia in the second half of 2009, while Zhejiang Geely began shipping to New Zealand and Australia in 2009; Chery also began recently. Australia offers Chinese carmakers a testing ground for developed markets, and it also offers a higher standard for port facilities and operations. Another location with somewhat better facilities is in Panama. Often vehicles from China head to Panama on ro-ro ships for distribution across South America. “Panama has ro-ro facilities so cars go from China to Panama and then on to other countries. But in Central America there are no ro-ro facilities so we have to use containers. Africa is similar so we use containers there as well,” says the anonymous agent. Indeed, Wallenius Wilhelmsen Logistics (WWL), which operates large pure car and truck carriers (PCTC) also uses Panama as the hub for transhipment. Ships filled with vehicles from China meet ships en-route from North America to South America in Panama where the vehicles are transhipped in vessels heading south.

But Tonjum says the lack of facilities for ro-ro vessels does not hinder WWL’s decision to call at many ports in developing and emerging markets. “We have the ramp,” says Tonjum, meaning as long as there is a flat surface at the port, vehicles can be driven off the PCTC vessel.

WWL has worked with most carmakers in China exporting vehicles to markets such as Syria, Egypt and Algeria, although Tonjum declined to name brands, stating confidentiality clauses. Winning customers in today’s market is tough, he says, but frequency and regularity of shipments is the way to win business as many smaller lines cannot offer these services. “If you want to ship cars you need frequency and regularity,” says Tonjum. “We have two to three sailings a month from the three main ports [Shanghai, Tianjin and Guangzhou] in China to all North African and Mediterranean ports–from Syria the ships then go on to Italy.” Syria’s main port with ro-ro facilities is Tartous. In 2008 a Memorandum Of Understanding was passed between Syria and Italy to increase cooperation and improve services between the port of Tartous with the port of Livorno in Italy. “But even if they don’t have a special car terminal we can go to container or regular ports,” says Tonjum. The quayside is basically the same in ro-ro ports and general ports–it is just the facilities that are special in ro-ro terminals for receiving and loading vehicles, he explains. “So we can also service the West Coast of Africa and South Africa with transhipments, with two sailings a month,” says Tonjum. 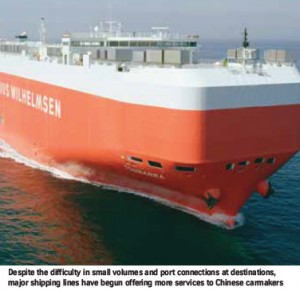 But the lack of special facilities for moving vehicles and adequate storage space all adds time to the service. As PCTCs are filled with vehicles from a number of carmakers in one port, delivery times are delayed for the next port. In a highly competitive market this is a big hindrance. “In some of these ports there can be congestion,” says Tonjum. “This is a challenge in many developing markets.”

The ro-ro alternatives: containers or CKD
Chinese carmakers are aware of the problem of shipping vehicles in containers to countries with undeveloped ports, as the potential for damage to vehicles is higher than by ro-ro. To supply many of these markets from Africa to South America, a trend to develop assembly plants across markets is on the rise. These countries require low investment compared to developed markets and feature generous government tax subsidies and benefits for localising production. Chinese carmakers are setting up bases in places like Egypt, Iran and Vietnam. This trend is one reason why Chinese carmakers appear unlikely in the foreseeable future, if ever, to individually export the large numbers that shippling lines dream of.

“As vehicle exports to a given country reach significant scale, the Chinese OEMs typically plan to consider establishing local CKD [complete-knockdown kits] assembly in the target export market to reduce logistics costs and enjoy tax benefits. Therefore, I believe that the volume of complete vehicle shipping out of China is unlikely to ever achieve the scale that the Japanese OEMs once had for shipping vehicles to North America. By the time volumes are that high they will have already set up localised assembly,” says Stephen Dyer, principal at AT Kearney (Shanghai) Management Consulting.

State-owned Beiqi Foton Motor exports light trucks from its plant in Changsha in China’s Hunan province. Business is increasing, so the carmaker has set up vehicle assembly plants in Vietnam and Indonesia. Kits can be shipped by rail or sea to Vietnam and Indonesia and then assembled rather than risking greater damage using containers for fully built vehicles. “We export products to many overseas countries and regions, such as Vietnam, Burma, Indonesia, Syria, Mexico, Iraq, Iran, Madagascar, Ethiopia, Egypt and Colombia. Until now, our Changsha plant has two KD factories in Vietnam and Indonesia, respectively, in order to realise localisation and increase competitive ability,” says a spokesperson for Changsha Foton Vehicle Tech, a Beiqi Foton subsidiary.

Passenger carmakers echo the trend. Chery Automobile has assembly plants in Iran, Egypt, Indonesia, Uruguay, Malaysia, Thailand, the Ukraine and in Russia, says the company. Chery only began its life as a carmaker in 1998, but today it sells more than 500,000 vehicles a year in China and around 100,000 in global markets. Geely has an assembly plant in Russia with others in the pipeline, such as in Turkey and Mexico, says a spokesperson. In June 2009, Geely won “Syria’s best China automobile brand in the Syrian market” award having sold more than 10,000 cars there since 2002.

A rise in premium imports
In China, meanwhile, sales of imported vehicles rose in 2009 despite the global economic downturn. “There was an 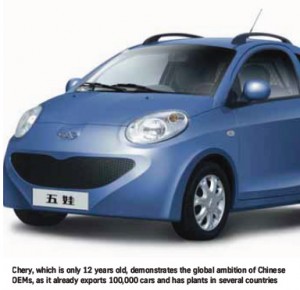 increase in sales of imported models in China last year, particularly for luxury cars and SUVs,” says Austin Sun who analyses vehicle sales and forecasts in China at CSM Asia Corp. “Although the purchasing power is lower due to the financial crisis and the difficulty of the export business, affluent Chinese buyers still buy high-end models. So we have seen growing demand for the BMW 7 series and the Mercedes S class.”

This shift toward premium cars is further highlighted by a second but related trend in import vehicle demand in China in 2009 compared to 2008. In 2008 it was Japanese-made cars that topped the imported vehicle list. However in 2009 it was German-made vehicles that the affluent in China demanded. In 2008 around 154,018 cars were imported to China from Japan, while during 2009 that dropped to 145,028. Meanwhile in 2008 a total of 71,088 cars made in Germany were imported to China, rising to 99,996 units last year (there were also higher sales of locally-produced Mercedes and Audis, for example). Demand for imported cars steadily increased in 2009 from 23,478 units imported in January to 53,764 imported in November as well as a whopping 61,723 units imported during December.

That rise is good news for global shipping lines. This year Eukor Car Carriers has begun weekly services from Europe to China, and other shipping lines will undoubtedly pay attention to this trade lane. However it’s clear from the relatively low volumes, and fractured market destinations, that serving Chinese imports and exports is not going to be a straightforward repeat of the Japanese or Korean export booms of recent decades.