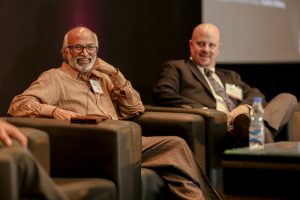 APL Logistics Vascor Automotive, the automotive logistics joint venture, will add more finished vehicle carrying rail rakes to its operating fleet next year, bringing the total in use to 15 from just 3 at the start.

“By the middle of next year, there will be 15 rakes on circuit which will practically mean that every day there will be an auto loading and downloading point,” said Anantharaman.

The joint venture has invested 2.5 billion rupees ($36m) since entering the country in 2012. It started shipping cars via rail in 2014, with the first train running from Chennai to Delhi.

Having begun with just 3 rakes, the company has steadily expanded, scaling up to 6 rakes and 8 terminals last year; there will be 15 rakes in operation by the middle of next year.

The company also has 50 trucks (35 in Delhi and 15 in Chennai) to complete the first and last miles of the journey.

Road biasThe growth in carrying cars on this mode of transport is promising for India, a country where the modal mix for cargo transport is skewed heavily towards roads at nearly 60% of volume, with underutilisation of lower cost modes such as rail (31%), water and air transport, according to Garrett.

To put this into a more global perspective, Garrett showed the share of road transport to be much lower in other major economies such as the China (30%), the US (37%) and Europe (10%).

Garrett said in countries like the US, there was a big difference in rates of rail versus road, creating incentives for companies to use the former to ship finished vehicles.

However in India they are similar, he added.

“There is very little gap between the truck and the rail to spur more movement onto the rail,” said Garrett.

He stressed that a single train could take 40-50 trucks off the road for the largest leg of a journey.

“I believe it is the automotive industry’s responsibility to society to do what they can to minimise the carbon footprint and getting off the trucks and getting onto rail is one way to make that happen,” said Garrett.

He added that low returns for players like APL Logistics Vascor meant a number of changes would be needed to entice new investors into the market, including an adjustment to rates and payment terms.

“I would be surprised to see a bunch of people jump in on this because nobody is going to put one rake in place with this Afto policy because the payback is going to be 15 years. It is just too expensive,” he said.

“Things are going to have to change and I think they will – but it is going to take an industry effort to make that happen.”

Journey times are another issue where improvement is required, with passenger trains taking priority over freight in much of India.

Anantharaman said: “The headway will come when dedicated freight corridors [are introduced].”

He pointed out that automotive annual volumes on Southern Railway remained insignificant when compared with the likes of coal (52% of total volumes), fertilisers (13%) and cement (5%).

He said coal loading was likely to decrease over time with the growth of sustainable energy generation, namely wind. Therefore, the railway group was looking at other freight, such as finished vehicles.

Last year, Indian Railways inaugurated its first common user finished vehicle rail hub at Walajabad station, in Chennai in the south of India, close to a cluster of assembly plants.

The hub is part of the Indian government’s plan to increase the movement of vehicles by rail in India substantially over the next decade.

“I am happy to say this loading is going very well without any hassles and it is being very well coordinated by APL Vascor,” said Anantharaman.