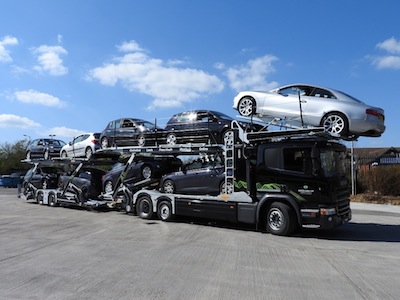 The fleet, which represents an investment of £700,000, is made up of six Scania P410 trucks and a corresponding number of custom-built Pegasus trailers from equipment maker Rolfo. Each trailer can carry up to nine vehicles and each has a ‘peak deck’ for additional capacity.

Aston Barclay already has two of the new transporters on the road and all six will be in operation by the end of this year. In total, the company has nine transporters operating out of its Chelmsford and Prees Heath locations (it also has locations in Leeds and Westbury).

Scania manufactured the Euro 6-compliant trucks in Sweden. From there, they were transported to The Netherlands for fitment of an additional axle to increase the gross vehicle weight (GVW) and allow for a 19-tonne load capacity. They were then shipped to Rolfo in Italy for the nine-car trailers to be fitted.

The vehicles were then delivered to Stowmarket-based Scania distributor, TruckEast, for final preparation before delivery to Aston Barclay’s Chelmsford facility by Belle Trailers, which provides specialist delivery services.

In a statement, Aston Barclay said that as part of its commitment to reduce carbon output it had specified 450-litre endurance fuel tanks across the new fleet for increased flexibility and economy. These complement Scania’s Eco-roll technology, which lowers fuel consumption by calculating when to allow the vehicle to coast downhill in neutral.

The trucks are also fitted with side-guards and Class V and VI close-proximity mirrors to comply with the latest legislation, as well as an in-cab, MDR recording system with four cameras.

Aston Barclay has also upgraded its vehicle collection and inspection service by installing imaging technology at its Prees Heath, Leeds and Westbury sites in the UK. The company has now installed turntables that have full ground and elevated lighting. This allows vehicles to be photographed from every angle and means images can be quickly uploaded to sales catalogues on its website.

According to the company, during the March 2016 registration plate change, vehicles were collected at midnight from dealerships and then imaged, inspected and prepared for sale before being sold on the auction floor, all in less than 36 hours.

“We understand that speed of sale is crucial for our buyers and sellers,” said Glenn Scarborough, managing director of Aston Barclay. “Recent investment in our logistics and preparation services demonstrates our commitment to facilitating this through a bespoke service. Using modern technology in support of our services enhances efficiency, leading to cost savings that we are able to re-invest in other areas of the business.”