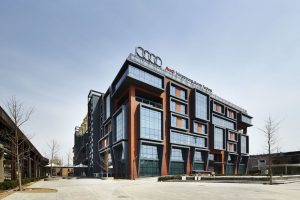 Audi has agreed to sell any vehicles produced under its deal with SAIC through its existing sales network, after dealers expressed fears the new partnership would increase competition and lose them access to key new products.

The company already has a 29-year partnership with FAW Group in China and last year announced plans for a second joint venture with carmaker SAIC to produce and sell cars there.

“All parties reached a mutual understanding that Audi models from a potential partnership between Audi and SAIC Motor would be sold through the brand’s existing dealer network in China,” said the carmaker this week.

“In accordance with legal requirements, a new sales steering structure will be defined for the unified distribution of Audi products from two partners.”

In the next five years, the Audi brand at FAW-Volkswagen will bring five new e-tron models to market. The e-tron range includes electric and plug-in hybrid models.

An Audi spokesperson told Automotive Logistics that it was too early to say when production would begin under the SAIC partnership.

“Talks are ongoing. We cannot make any predictions regarding timing for now,” said the spokesperson.

Audi remains the best-selling premium car brand in China although it has been losing ground to its competitors recently.