Audi says its rail transport in Germany is now carbon-neutral 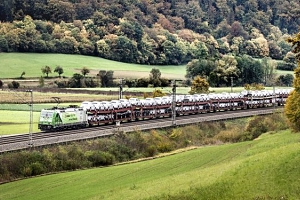 Carmaker Audi says it has achieved CO2-neutral status in the transport of goods and vehicles by rail to and from its plants in Germany.

Since August 1st 2010, the so-called ‘green trains’ have been travelling from Ingolstadt to the North Sea port of Emden. Since 2012, cars have also been transported to Emden from the Audi plant in Neckarsulm.

The company says that over this period, 1.6m vehicles have been transported and 63,000 tonnes of CO2 emissions avoided.

“Seven years after the start of the project, all Audi transport with DB Cargo to and from the two production plants in Germany is now CO2-free,” said the company in a statement.

Each day, around 25 trains are loaded or unloaded with materials and cars at the two plants.

The move is part of Audi’s goal to make its car manufacturing completely CO2-neutral in the future.

“We are pleased to be the first rail logistics company to make our transport operations CO2-free and thus to make an important contribution to Audi’s goal of CO2-neutral production,” said Jens Nöldner, CEO of DB Cargo Logistics.

In 2014, the carmaker was the first company to have its CO2 footprint certified according to global standard ISO 14064, the results of which it has used to derive various measures to reduce its environmental footprint.

In May, the OEM also announced a new sustainability ratings system for its suppliers.