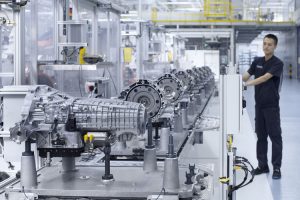 Audi is working with VW Automatic Transmission Tianjin (VWATJ) in China to supply seven-speed S tronic transmissions to the FAW-Volkswagen plant in Changchun, which makes the Audi A4L.

The two companies have set up a new €577m ($654m) facility in Tianjin to make the transmissions.

It is the first time the Audi has made transmissions locally in China. Previously, transmissions for the Audi A4L were supplied from VW’s transmission facility in Kassel, Germany, a spokesperson for Audi China confirmed. Kassel is the VW Group’s primary transmission plant and supplies around 4m manual and automatic transmissions every year.

VWATJ is a wholly-owned subsidiary of Volkswagen Group and Audi and VW Group China are roughly equal shareholders in the subsidiary.

The new Tianjin facility will also supply transmissions for the Audi A6L and the Audi Q5, also made at Changchun.

“Currently the production output of the Volkswagen Automatic Transmission Tianjin [plant] is only for the models of the modular transverse platforms,” said the Audi China spokesperson. “Starting with the locally produced new Audi A4L, the DL 382 transmission will be used for models of the second-generation modular longitudinal platform.”

Audi said the new facility would have an annual capacity of 240,000 transmissions but that could be doubled in a later phase, thanks to the modular production set-up of the factory.

“With our first local transmission plant, we have brought another key Audi competence to China,” said Joachim Wedler, president of Audi China. “The transmission production in Tianjin marks a milestone in our localisation strategy.”

Audi declined to confirm which local transport providers it would be working with for delivery of transmissions from Tianjin to Changchun.