Audi using emergency measures to deal with floods at Neckarsulm 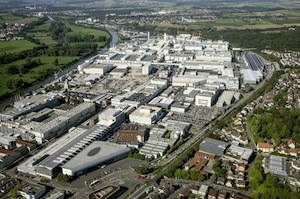 German carmaker Audi has confirmed it was forced to shut down production at its Neckarsulm plant near Stuttgart for the first shift on Monday, because of severe flooding in the south-western region of Germany. Parts of the plant were flooded and supply routes were cut off. However, production was up and running again by the second shift on Monday, according to the company.

“Due to heavy storms and severe weather in south-west Germany, several tracts of the Audi AG Neckarsulm plant [were] flooded on Sunday night,” a spokesperson told Automotive Logistics. “Parts of the production started to run again on Monday afternoon. Currently, our first priority is the cleaning-up operation.”Audi is employing “detour and emergency concepts” to manage parts supply, the spokesperson said, adding that for the time being, vehicle delivery to Audi Forum Neckarsulm was not affected.

The Neckarsulm plant makes a wide range of Audi models, including the A4 and A6 sedans, the A7 and RS7 Sportback models, and various A8 and R8 vehicles, among others. Annual production exceeded 272,000 units last year.

Torrential rain that fell during the morning of May 30th claimed four lives and caused extensive damage to areas in the German state of Baden-Württemberg, where the Neckarsulm plant is located. Daimler’s Mercedes-Benz plant in Untertürkheim is also located in the state, but it did not report any disruption.