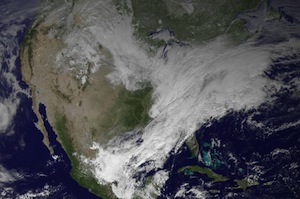 The record adverse winter conditions that hit the US and Canada at the beginning of this month, travelling from the Midwest through the north central states to the East Coast, have taken their toll on manufacturing facilities and automotive shipments during the last couple of weeks. Staff shortages and the impact on inbound shipments were among the causes.

Chrysler said that its Toledo plant in Ohio and all four Kokomo facilities in Indiana were closed due to a state-of-emergency notice being issued by local and state authorities. The carmaker’s Belvidere facility in Illinois also cancelled one shift.

The carmaker’s Windsor and Brampton plants had a scheduled down week beginning on January 6.

The weather had a less severe impact on aftermarket parts deliveries, according to the company.

“There were a couple of days where we went behind, but we made it up without great effect,” said the spokesperson. “It wasn't so disrupting also because there we had less customers in dealerships.  It took us one to two days to significantly mitigate the impact. Material flow has been recovered.”

Chrysler would not specify how it had been working with its logistics providers to maintain both inbound and aftermarket deliveries, only to say that it had used a variety of solutions where needed to ensure the continuity of supply.

However, those logistics providers have been busy.

Air Charter Service (ACS) said it has received a number of urgent requests for the movement of parts as a result of the unprecedented weather hitting North America.

“We’ve been very busy this past week sourcing aircraft to keep our clients’ supply chains moving,” said Richard Thompson, executive vice-president of ACS North America. “Michigan and Indiana have been hit particularly hard and our customers are telling us that their trucking operations are simply unable to complete their runs. When these kinds of delays hit, ‘go-now’ aircraft charters are often the only way to keep factories operational”.

Thompson went on to say that the impact of the weather was not contained in the north-western US and that ACS’s Canadian and West Coast offices had also been assisting customers.

“A lot of their suppliers are obviously based in the worst hit areas and this has had an impact on the entire industry,” said Thompson. “We’ve chartered aircraft for other industries because of the weather but none appear to be hit as hard, logistically speaking, as our automotive clients,” he added.

Over at emergency logistics provider Evolution Time Critical, managing director Brad Brennan said that preparation based on lessons learned in previous years had stood the company in good stead to meet customer needs.

“In this instance, the planning worked well with no noticeable increase in the requirement for emergency deliveries,” said Brennan, adding that it was a case of solving issues before they became emergencies.

“It's the routes traditionally used by emergency deliveries - fast road and air - that are most affected by poor weather, making it more difficult to solve very time critical issues,” continued Brennan. “One of the lessons learned by the big vehicle manufactures and tier ones is that in severe weather, the best solution is to not have a really urgent problem.”