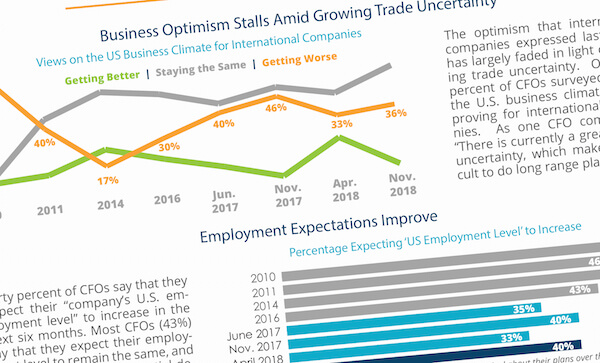 The possibility of Donald Trump placing duties on cars and automotive parts being imported into the US is the largest threat to the country’s economic competitiveness, according to the chief financial officers (CFOs) of international companies taking part in a recent survey.

The US Department of Commerce is currently investigating whether it is appropriate to impose such tariffs on the grounds of national security, as happened earlier this year with steel and aluminium.

“If the administration imposes bygone industrial policy in the automotive sector under the pretext of national security, this survey shows real concern that similar action could creep into every corner of our economy,” said Nancy McLernon, president and CEO of the Washington-based Organization for International Investment (OFII). “[Automotive tariffs] will invite retaliation from our trading partners, limit opportunities for US workers, raise prices for families and harm America’s economic competitiveness.”

The main conclusion from the organisation’s latest CFO Inbound Investment Survey, she added, was that the administration’s trade policies were generating significant concerns for international companies with major operations in the US.

The OFII said this was surprising, as more than 40% of CFOs taking part in the survey said their companies had been directly harmed by the steel and aluminium levies and/or the Chinese tariffs already in effect. Among the consequences of this year’s tit-for-tat trade wars has been the US and China levying a 25% duty on each other’s auto parts, with China imposing a 40% levy on certain US finished vehicle imports.

The Department of Commerce has until February 17 to present its report on automotive tariffs – conducted under Section 232 of the Trade Expansion Act of 1962 – to the president, who then has 90 days to act. But the statutory timetable does not rule out an earlier decision, which is adding to the concern in the car industry and beyond.

Should Trump go ahead with such automotive duties, the European Union said it would retaliate with tariffs on US-made cars, their components and a range of other goods. The threats are souring US-EU relations as trade negotiators discuss a deal to reduce tariffs on industrial goods.

The worries of the US car industry were voiced at a public hearing in Washington last week.

“While even the threat of increased auto tariffs has created tremendous uncertainty for the entire industry, the implementation of Section 232 tariffs would seriously jeopardise the vitality of the automotive sector,” said Jennifer Thomas, vice-president of federal government affairs at the Alliance of Automobile Manufacturers (AAM), which represents 12 domestic and international carmakers in the US. “Increased vehicle costs as a result of tariffs would trigger a cascading effect on the industry and economy. Demand for vehicles and parts would drop, leading to lower US production and ultimately significant loss of American jobs. Additionally, those Americans servicing their cars would face inflated costs as a result of increased tariffs on auto parts.

“This impact does not take into account the likely retaliation by our trading partners, which would spread the economic pain across other sectors, like agriculture,” she added.

Thomas went on to say that increased automotive tariffs would not only undermine the potential success of the United States-Mexico-Canada Agreement (USMCA) – the new accord that is intended to replace Nafta – but would also pose “a material threat to the economy”.

[related_topics align="right" border="yes"]She urged the administration to lift the threat of increased auto tariffs by dropping the Section 232 investigation.

Thomas said the AAM would also like an end to the Section 232 tariffs on steel and aluminium, and was disappointed they were not lifted at the conclusion of the USMCA negotiations.

“The success of both the new USMCA and our nation’s auto sector continue to be undermined by these tariffs,” she said. “Over the past year, automakers have witnessed a more than 30% increase in domestic steel prices.”

The increase in price was driving up production costs for all US automakers and threatening the automotive industry’s competitiveness globally, according to Thomas.