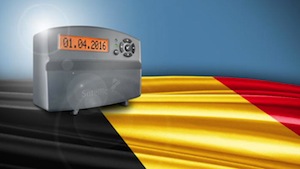 Striking truck drivers in Belgium are blockading key transport routes in the south of the country in protest against the introduction of a new toll for heavy goods vehicles that some transport companies have said could add an estimated 8% to their operating costs.

The toll, which came in at the beginning of April, affects trucks weighing more than 3.5 tonnes. They are charged between 7 and 30 euro cents (8-34 US cents) per kilometre, based on their maximum permissible gross vehicle weight (GVW), their Euro emission standards rating and the type of road.

The International Road Transport Union (IRU) has described the introduction of the toll as ‘chaotic’ and called for an emergency suspension in enforcement, after huge queues of trucks reportedly built up at Belgian borders on the first day of the toll because transport operators and drivers were unable to obtain the on-board devices needed to comply with it.

The IRU is calling for a transition period before the toll is enforced to address such “teething problems”. Vehicles not equipped with the on-board device currently attract a penalty of €1,000 ($1,138).

“The road freight transport sector has done everything possible to prepare in time for compliance with the new Belgian toll,” said the union in a statement. “It received assurances from the authorities and the responsible tolling operator that the system would be implemented smoothly and functioning OBUs [on-board units] would be available in sufficient numbers, which unfortunately has proven not to be the case until now.”

The IRU has also called on protesting truck drivers to lift their blockades, however, stating that road blocks are not the answer to the problems brought about by the new road toll.

A number of transport and logistics providers have added their voice to the debate over the toll recently.

Gary Dodsworth, director at Rhenus Logistics, commented: “While it is not uncommon to see governments introduce road or motorway tolls for HGV use, such decisions can have wide-reaching consequences when the country involved is a transit route for other destinations.”

The toll was likely to have a knock-on effect on heavy goods vehicle routes to any country east of Belgium, added Dodsworth, in a similar way to the German Maut toll introduced in 2005 for trucks of over 12 tonnes GVW on that country’s motorway network.

“Unfortunately, the toll cost will have an impact not only on collections and deliveries to and from Belgium, but also on all freight or vehicles that travel within the country en route to other destinations,” said Dodsworth. “Rhenus Logistics is making every effort to explain and control these additional costs to minimise the impact on customers.”

A spokesperson for German finished vehicle carrier Horst Mosolf said it was paying the road tax but had not experienced any disruption to its services.

However, the spokesperson added that the company was having to deal with the ongoing strike action, which is currently blocking motorways, particularly in the southern part of the country. Mosolf is currently redirecting its trucks to avoid traffic jams in that area.

Cost to societyWhile transport companies deal with the disruption and assess the cost, Transport & Environment (T&E), an environmental transport interest group, countered criticism of the toll by saying it was a fair way to ensure that trucks paid for a bigger share of the damage they caused.

The group recently commissioned an independent study which suggested trucks cost society €143 billion a year across the EU and said only 30% of that cost was recovered by taxes and tolls.

“Belgium is absolutely right to introduce a km-charge for trucks,” saidSamuel Kenny, freight and climate officer at T&E. “Truck tolls are a great way to clean up the trucking fleet and improve efficiency in the haulage sector. But it’s also about fairness. It’s time for trucks to pay a much bigger part of the costs and damages they cause.”

According to T&E, trucks account for around one-quarter of road transport’s climate emissions, which the new study found to cost €16.7 billion in global warming impacts. Furthermore, HGVs cause over 40% of transport NOx emissions in Europe, costing €15 billion – mainly due to adverse health impacts. At €58 billion annually, road damage is European trucks’ biggest cost to society, the study found.