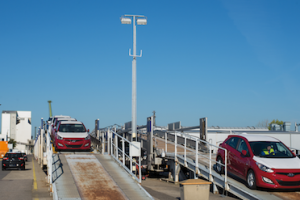 BLG Logistics Solutions Italia, a subsidiary of the German transport and logistics giant, has said it is better able to control vehicle turnover across the ports and inland compounds in which it operates in Italy following the deployment of a vehicle compound and distribution management system from logistics software provider, Inform.

BLG Logistics Solutions Italia operates at a total of eight sites in Italy and last year handled approximately 25,000 vehicles in and out of its compounds.

The Syncrotess Vehicle Distribution multi-compound application Inform has supplied makes all of BLG’s logistical processes across its different sites visible and allows the provider to see where and when a car has been delivered. It also indicates at which compound a vehicle is located at any given time.

A spokesperson for BLG Logistics Solutions Italia said implementation of the Syncrotess system offered several advantages in the daily management of its compounds, including reduced vehicle pickup times, real-time updates on vehicles in stock and full transparency of all logistics processes.

“We chose [Syncrotess] because this technology was the right solution for our requirements and its easy implementation allowed us to be operative almost immediately,” said the spokesperson. “The connection of a compound to the system took no longer than a few days.”

Part of that is down to the system being web-based, which meant it required neither hardware firewall equipment nor client software on the PC.

“The only thing that is needed is an internet connection,” confirmed the spokesperson.

The roll-out in Italy marked a step forward in terms of the software’s usage, too. “For the most part, logistics firms normally use Syncrotess Vehicle Distribution only for intelligent management of the compounds,” said Inform in a statement. “However, this version introduced by BLG will also allow the processes across multiple sites to be centrally controlled, tracked, automated and documented.”

With its previous system, BLG’s compound data was distributed across different spreadsheets and sites, making it difficult to use in practice. The new system, however, is equipped with interfaces to all relevant data systems so that customer and partner systems can be simply linked to the central Syncrotess control point.

According to Inform, it took just two months to link up all the different locations in Italy to the Syncrotess system.