BMW and Toyota could leave UK after no-deal Brexit 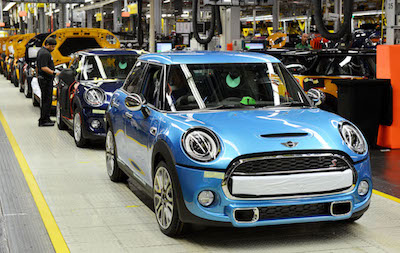 BMW and Toyota have said this week that they could withdraw from the UK if there is disruption to business caused by a no-deal Brexit.

Speaking at the start of the Paris Motor Show, BMW’s CEO, Harald Krüger said the carmaker could shift production of the Mini from Oxford to its plant in the Netherlands in the event of a hard Brexit that jeopardised the current movement of parts and finished vehicles. He said BMW was preparing for the “50:50 chance” of the UK leaving without a deal for continued trade.

Three Mini variants are currently built under contract at the VDL Nedcar plant in Born, alongside the BMW X1. BMW Oxford builds a range of Mini variants.

Johan van Zyl, CEO of Toyota Europe, also speaking at the Paris Motor Show, said the Japanese carmaker would have to temporarily close its Burnaston plant in the UK and review production plans.

“If there would be any disruption we’d have to close our plant temporarily and make alternative arrangements,” he told reporters. “In the longer term, if we were to change the logistics it would add more cost and impact on our competitiveness, and of course the future of our operation.”

Toyota exports 90% of what it makes at Burnaston. Vehicles include the Auris, Avensis, Corolla and Carina E.

BMW has also said previously that it would shut its plant immediately after Brexit as part of a no-deal contingency plan.

Jaguar Land Rover, which is already dealing with business pressures that include consumer concern over diesel vehicles, said it was delaying a decision on whether to build electric vehicles in the UK until it was clear what the outcome of the Brexit deal would be.

Last month JLR’s CEO Ralf Speth warned that disruption to the supply of even one part could cost the company £60m ($78m) a day and that the success of the company depended on “seamless logistics”.

The Society of Motor Manufacturers and Traders (SMMT) said in September that a ‘no-deal’ Brexit had to be ruled out to avoid undermining the car industry’s ability to operate. SMMT analysis suggests that no-deal and the resulting tariffs on light vehicles alone would add £5 billion to the collective EU-UK auto trade bill.

“Tariffs alone should be enough to focus minds on sealing a withdrawal agreement between the EU and UK but the potential impact of ‘no-deal’ means the stakes for the automotive sector are far higher,” said Mike Hawes, the SMMT’s chief executive. “Without a deal, there can be no transition period and the complex issues surrounding tariffs and trade, customs, regulation and access to talent will remain unresolved. Our industry is deeply integrated across both sides of the Channel so we look to negotiators to recognise the needs of the whole European automotive industry and act swiftly to avoid disruption and damage to one of our most valuable shared economic assets.”

The impact of Brexit on the UK automotive supply chain will be under discussion at next week’s Automotive Logistics UK summit being held at Silverstone, October 9-10