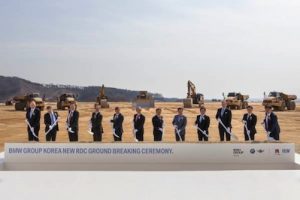 [Updated 14th April] BMW is investing 130 billion won ($110m) in a second regional distribution centre (RDC) in South Korea to better stabilise the supply of aftermarket parts to BMW, Mini and Motorrad service centres across the country. The facility is expected to create 600 jobs.

The new facility will be at Anseong, in Gyeonggi province, close to the country’s national highway network and will feed parts to 83 service centres across the country – 50 BMW, 19 Mini and 14 Motorrad.

At 211,500 sq.m, the RDC will be three times the size of BMW’s existing distribution centre in Incheon. It will be constructed in two phases, the first of which will be complete by February next year and will allow BMW to handle more than 90,000 unique part numbers across over 57,000 sq.m. The second 32,000 sq.m centre should be completed within ten years.

“We expect the new RDC to become a key basis for customer satisfaction and to offer much better premium service in a timely manner,” said BMW Korea’s CEO, Dr Hyo-joon Kim.

BMW confirmed that it was working with logistics provider Geodis Wilson on the management of the facility and that the parts would be distributed to its network with Korean transport provider Shinhwa Logistics Service.

BMW held a groundbreaking event at the end of March (pictured) to mark the start of work on the RDC. At the event, Dr Kim was joined by BMW’s Wolfgang Baumann, vice-president of parts logistics management, Klaus Hauser, vice-president of building projects, and Uwe Horstmann, design and consulting executive of Europe and Africa. Other officials in attendance included Hwang Eun-seong, mayor of Anseong City and Yoo Gwang-chul, speaker of Anseong City Council.

In other news, BMW's division in Thailand is planning to increase car and motorcycle exports over the next two years from its facility in Rayong.