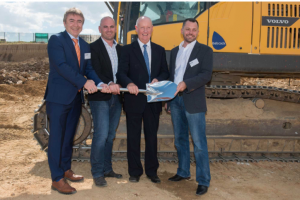 German carmaker, BMW has announced a R400m ($31m) investment in a South Africa regional distribution centre, about 55km from its Rosslyn plant near Pretoria.

Local company, Attacq will be developing the 32,000sq.m distribution centre at the Waterfall mixed-use development in Midrand. Distribution is expected to start by mid-2018, for an initial 10-year lease period.

Tim Abbott, CEO of BMW Group South Africa and Sub-Saharan Africa (second right), said: “Space limitations restricts the expansion of the warehouse in our current location in Midrand. By moving the warehouse to a larger site, we also free up space on our campus to create state-of-the-art power hub,” he adds.

The new warehouse will be double the size of the previous facility, according to a statement.

BMW South Africa’s headquarters are also located in Midrand. This campus will also be revamped as part of the announced spend.

The company says relocation of parts warehousing to the new site in 2018 opens space to build a dealer training centre at the campus.

In 2015, the company announced a R6 billion investment at Rosslyn as it prepared to build the new X3 there.

Speaking to Automotive Logistics last year a local spokesperson said: “The development of the local automotive supply chain in relation to future X3 production is a priority for BMW Group South Africa as part of the R6 billion ($410m) investment plan for X3.”

The Rosslyn plant was the first manufacturing facility in the group set up outside Germany, back in 1973.