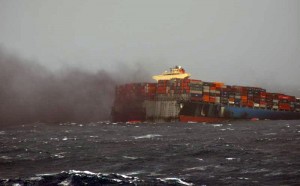 Both halves of Mitsui OSK Line’s stricken container vessel MOL Comfort have now sunk in the Indian Ocean with a loss of more than 4,000 TEUs.

The vessel, which broke in half in heavy seas after sustaining damage on June 17th, was en route to Saudi Arabia from Singapore, having originally loaded in Japan.

Despite salvage efforts the aft section of the vessel sank on the week following the break up, leading to the loss of 1,700 containers and 1,500 metric tonnes of fuel oil as adverse weather conditions persisted.

A fire then broke out on the fore section of the vessel, which salvage vessels battled for seven days before that section also sank on July 11th, with the loss of around 2,400 containers and 1,600 metric tons of fuel and other oils.

A number of automotive OEMs and tier suppliers had cargo aboard the vessel and are continuing to assess what the likely impact will be on their supply chains. As reported in June, emergency logistics provider Evolution Time Critical has been working with those affected to assess the impact on the supply chain and prepare contingencies for the supply of parts.