A revision to a recent law governing new terminal investment in Brazil’s ports is causing concern among ro-ro operators who are worried that concessions will be awarded to bulk commodities and containers at the expense of vehicles. 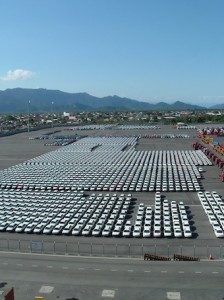 Last December, the Brazilian government announced a R$58 billion ($26 billion) incentive programme to overhaul and expand the country’s congested ports. The package consists of public investment in port infrastructure projects, including dredging work and improvements to landside access. It also includes reforms to the current legal and regulatory structure of the port industry as the government brings in more public-private partnerships. Government investment through the customs and ports authority is limited to dredging, lighting and marking, and IT. All other investments will be from those companies winning contracts to operate at private ports or winning public terminal concessions.

The previous law (8630/93) applying to terminal development stated that the port authority needed to safeguard the competitiveness and productivity of full container and ro-ro modes (Article 30, section 2). However, in the most recent revision (12.815), passed by congress on June 5 this year, there is no mention of cargo or vessel type.

“The reason this is worrying is that without [this mention] it is pretty much open for only the more profitable type of terminals to be demanded for tender,” said Miguel Malaguerra, operations director for Grimaldi in Brazil. “We may find that all areas will become either container or bulk terminals, as both offer better remuneration to investors than ro-ro terminals, especially since the latter require large surface area and no vertical gains.”

Under the investment programme, the Brazilian government is favouring tenders from the private sector that offer to move the highest volumes of cargo at the lowest rates to users.

Malaguerra said that without government safeguards or guidelines to ensure that an area is set aside within the tender process for ro-ro cargo, market forces could end up excluding such facilities, including automotive terminals.

The government has announced that the first port to be tendered will be Santos, one of the ports that Grimaldi uses, this October. The TEV vehicle terminal at Santos is one of Brazil’s largest, able to handle 290,000 vehicles a year. However, congestion is still an issue and, according to Malaguerra, if market forces do favour bulk and container cargo, ro-ro operators could be excluded from the right bank of the port.

“Can you imagine Sao Paulo state being served by only one terminal with only one berth and 164,000 square metres of area?” he asked.

There are also questions over the zoning and development plan (PDZ) at Santos, which previously considered the Saboo region on the right bank for general cargo, under which vehicles are classified.

“There is supposedly a new PDZ and I say supposedly because nobody has seen it,” pointed out Malaguerra.

Grimaldi has, however, seen the plan for the port of Paranagua, where it also calls, and where a new vehicle terminal will soon be tendered, doubling the storage capacity. An extension to berths is under way and expected to be finished by November this year.

Ro-ro operators are arguing for something similar at Santos to complement the TEV terminal both for imports and to support future export potential from Brazil’s automotive base. The government has launched an automotive incentive programme for technical innovation and production expansion, which will run to the end of December 2017. It involves lower taxes on locally produced and imported vehicles. But the aims of the programme appear reduced without consideration for the infrastructure to support exports.

The plan’s incentives are geared to bringing new factories and investment to Brazil, but the potential is limited if it focuses only on the internal market, said Malaguerra.

“The government should also provide the ways and means for the automotive sector to be competitive in the world market and consequently to also actively export their finished products,” said Malaguerra.

However, law 12.815 has been passed back to congress following 13 vetos to the amendments made by president Dilma Rousseff. Deliberation over those points is eating into the already short amount of time left for ro-ro operators to negotiate safeguards until the first tender is issued in October.