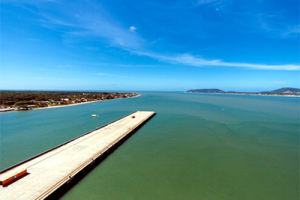 The Brazilian port of Itapoá has carried out a trial operation for the import of BMW vehicles from the US recently, with a view to starting more regular throughput.

BMW has a factory in Araquari that produces the 3 Series and X1 models, both of which are in high demand in Brazil. It also makes the X3 there and recently added the X4 to the assembly line. But it also imports some BMW SUVs from the US.

The recent trial through Itapoá included several dozen models. BMW did not confirm which ones were involved in the trail specifically but a range of models are imported from the M Series to the 7 Series. The Spartanburg plant in the US makes the complete range of X model SUVs. The vehicles were moved from the port by road to BMW’s distribution centre near its plant at Araquari, in Santa Catarina state, for onward distribution to dealerships.

BMW has used the port of Itapoá as an alternative to São Franscisco do Sul, one of three ports in the Santa Catarina port complex, which lies across the Baia da Babitonga inlet to the south.

Until now, Itapoá has only handled the import and export of containerised parts. The move to handle finished vehicles delivered by ro-ro vessel marks a shift in operational focus.

BMW has reported some positive results in 2016, despite Brazil’s economic difficulties, and has led the premium segment in the country throughout the year. It sold 11,860 cars last year and a further 1,436 Minis were registered in the country, according to a figures from Fenabrave, the national federation of vehicle distributors in Brazil.

In addition to production and imports for the domestic market, BMW started exporting the BMW X1 from Brazil to the Nafta countries last year through the port of Paranagua.

Three versions of the BMW X1 xDrive 28i are being produced in the Santa Catarina industrial complex for export to the US, all equipped with four-cylinder, 2.8-litre petrol engines. The company is expected to ship around 10,000 units a year to North America.

Last year, Brazilian carmakers looking to export as a means of offsetting losses on the domestic market benefitted from the introduction the second phase of the Brazilian Authorised Safe Operator Programme (OEA). This replaces the previous express customs clearance regime, known as Blue Line (Linha Azul).

The OEA is designed to ease the customs clearance process and as part of the new customs regime the government has also expanded access to the Special Customs Industrial Bonded Warehouse Regime (Recof), which allows companies to export tax-free.

Barry Cross contributed to this report.