Brexit casts shadow over outlook in automotive and logistics sectors 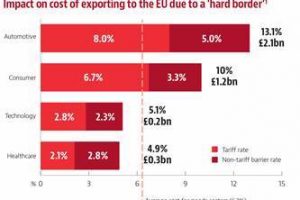 A new report out this week from global law firm Baker McKenzie has suggested that annual revenues from UK automotive exports could fall by nearly £8 billion ($10.6 billion) if negotiations with the EU follow a ‘hard Brexit’ line. At the same time, a separate report from Barclays Corporate Banking has indicated that uncertainty over Brexit is hampering an otherwise more confident and robust UK logistics sector.

The Baker McKenzie report, The realities of trade after Brexit, was produced in conjunction with Oxford Economics, the economic forecasting unit, and finds that the UK automotive sector stands to lose more than 22% of its global export revenues in the event of a hard Brexit; while the EU stands to lose just 0.8% of its total exports. It also suggests the UK automotive sector will be vulnerable to relocation and labour supply shortages.

The automotive sector is one of four covered by the report alongside the consumer goods, healthcare and technology industries. Overall potential losses for the UK in EU export revenues across those sectors amounts to £17 billion, according to Baker McKenzie. The firm says UK exports from the four sectors, which account for 45% of manufactured exports to the EU, are likely to be hit at least four times harder than EU exports in the other direction.

Brexit barriersThe automotive sector comes off worst, with tariff and non-tariff barrier costs set to rise by an additional £2.1 billion for the UK annually. The authors of the report state that both the UK and the EU will feel the impact on trade of a hard Brexit, including from the costs of tariff and non-tariff barriers, but suggest that impact will be significantly greater for the UK.

“We have heard a lot about how much Europe exports to the UK, for example, in the automotive sector,” said Ross Denton, trade partner at Baker McKenzie. “That may be true in numerical terms, but when you look at this as a percentage of their trade, you can clearly see that the EU exports a lot more broadly, to a whole host of other markets, and consequently, it is far less dependent on the UK as a market than the UK is on it. This will have significant implications for upcoming negotiations."

One good example can be found in August’s engine production figures from the Society of Motor Manufacturers and Traders (SMMT), which were up almost 12% on the same month last year to 150,000, with more than half made for export. Overseas demand for engines was up nearly 20% compared with last year, said the SMMT, and of more than 1.7m new British engines made so far in 2017, almost 56% were for export. However, the prospect of trade barriers risks depleting this growth, according to the SMMT.

“It’s great to see recent significant spending on production facilities and new technology continue to deliver returns,” said its CEO, Mike Hawes. “However, for UK engine plants to keep attracting this investment, it’s crucial that we maintain barrier-free trade with our key markets to ensure that demand for new cars and the engines that power them stays strong.”

The Baker McKenzie report shows that across the four sectors, the EU accounts for 49% of UK exports while the UK accounts for just 9% of exports from the EU.

“These companies were likely motivated to base their operations in the UK because of the single market access it offered and could seek to relocate if that market access is revoked,” says the report.

Confidence in the sectorMeanwhile, The UK Logistics Confidence Index 2017, also out this week and put together by Barclays Corporate Banking in conjunction with accounting and advisory network Moore Stephens, has suggested logistics operators have become more positive in the last year – though this is not related to any improvement in Brexit negotiations.

In the survey, almost half of the logistics companies taking part said they felt business conditions had become more difficult in the last year, with 61% saying they expected Brexit to have a negative impact on their business.

This pessimism shades an otherwise optimistic report that reveals a sector looking favourably at the potential for value-added services and new opportunities presented by technology, with 69% declaring investment in “innovative supply chain solutions”. Almost half of the companies surveyed said they were already investing in data-driven supply chains and a quarter of them said they would implement ‘big data’ solutions in the next 12 months.

Logistics providers that responded to the index also indicated a move to greater collaboration through mergers and acquisitions, with four in ten operators likely to make an acquisition in the next 12 months. This is a 15% increase on the number of businesses with takeover plans last year, according to Barclays, and is the highest level since the survey began in 2012.

“The confidence reported in this year’s index is really encouraging and demonstrates the resilience of the sector. “Despite a tough environment, firms are getting on with it,” said Rob Riddleston, head of transport and logistics at Barclays Corporate Banking.

“However, as the path ahead becomes clearer, this business-as-usual approach will need to flex. The battle to retain customers looks set to become more aggressive, as operators work to differentiate themselves through investment in new technologies and the value-added services that win customer loyalty, while the appetite to acquire, even in the next 12 months, is telling,” added Riddleston. “Both could become significant threats for those businesses who do not face the changing operational landscape head-on, and so miss out on taking advantage of its opportunities.”