Car ports come back to life in South America

The strength of the Brazilian car market has kept imports rising through Brazil and exports out of Argentina. But with investment in capacity needed, Tony Danby reports on future risks and development.

Brazilian and Argentine ports reported lower vehicle volumes in 2009 as foreign export sales crashed 40.5% to $8.29 billion. But the major ports braved the storm and are optimistic about exports and imports in 2010.

According to the Brazilian Motor Vehicle Manufacturers Association (Anfavea), carmakers sold 3.14m vehicles in the country during 2009, up 11% from the year before. Anfavea estimates vehicle sales should rise 5% to around 3.4m in 2010. South American vehicle flows are largely regional by comparison to North America or Europe, with the majority of imports and exports moving between Brazil and Argentina. Of Brazil’s new car sales in 2009, for example, less than 7% are imported from outside South America, according to IHS Global Insight, and 5% exported beyond the continent. In North America, by contrast, nearly 27% of sales were imported last year, while Germany exported nearly a third of its production beyond Europe. The relative strength of the Brazilian market therefore saved ports from the worst of the decline, with imports of cars to Brazil rising by 10%.

Port risk
In both Brazil and Argentina, there is concern about logistics bottlenecks, with ports no exception. Brazil’s crumbling highways are often unpaved or laced with potholes. Recent torrential rains in December and January even washed away bridges and gorged giant chunks from major motorways. Long delays often occur outside of ports. In the south, traffic gets caught up in queues of trucks loading soybeans from the harvest that runs from March through to September. To avoid the queues, the drivers have staging points where they wait until a designated time. Elsewhere, trucks get trapped in São Paulo or Rio de Janeiro’s heavy traffic and need to move through favelas (slums) that can be dangerous.

Moreover, experts complain of the endless red tape, slow customs and tight capacity of the major ports. Gustavo Ortelli, regional manager of port equipment provider, Solnet, warns that such delays often hamper logistics in Brazil. “Sometimes it appears that nobody really is in control,” he says. Industry players point out that even with the global economic downturn, the fees charged for parking or loading vehicles barely budged in Brazil. “The ports have a kind of monopoly,” says one expert, who asked to remain anonymous. The shipping companies, however, trimmed their rates by around 10% last year compared to before the crisis, he says.

Ports push for business
Brazil’s major port for vehicle exports is Santos, based close to carmakers in the industrial heartland of São Paulo state. Italy’s Fiat, located in neighbouring Minas Gerais state, uses Santos as well as the port of Rio de Janeiro. Ford, meanwhile, uses its own Miguel de Oliveira Terminal in the northeastern state of Bahia. Most ports are government controlled, while Ford is the only OEM to own a private vehicle terminal.

As exports shrank last year, port authorities worked closely with OEMs to maintain business. Paranaguá port, in the south of Brazil, for instance, worked with Renault as well as Audi and Volkswagen to support volumes. Paranaguá is also eyeing expanding exports to distant markets such as Africa. Other ports such as Porto de Suape in the northeast of Brazil are looking at vehicle shipments for the first time; it recently began importing cars from General Motors.

According to Mauricélio Gomes Faria, Fiat’s logistics manager in Latin America, Brazil’s growing strength could lead to barriers. In Faria’s opinion, a major challenge for exports this year will be the strengthening Brazilian real, which has appreciated considerably against the US dollar, making Brazilian exports more expensive. Faria expects Fiat to export about 50,000 cars and import 70,000 in 2010, of which 90% come from Argentina. This builds on 33,000 cars exported to Argentina from Brazil in 2009 compared to 61,500 cars in 2008. Fiat sends about 60% of its vehicles through Rio de Janeiro and 40% to Santos port in the southeast of Brazil, which are 150km and 600km respectively from its Betim plant. The OEM also transports cars via Terminal Zàrate to the north of Argentina’s capital, Buenos Aires. The Italian carmaker transports 70% of its cars by ship between Argentina to Brazil, with the remaining 30% going by trucks.

Faria doesn’t see much difference between Santos and Rio de Janeiro. With a lead-time of around a week to pass through the ports, Faria says that Fiat’s trucks take its cars from Betim a week ahead of the sailing. It arranges to have 1,000-2,000 cars waiting at the port and then 300-400 cars per day pass through the port onto vessels.

Northern Lights
But others complain that Brazil’s largest ports such as Santos or Rio de Janeiro faced serious congestion in 2008 when the car market was in full swing. The government is investing to improve the situation, but it may not be enough. Some OEMs are therefore choosing to use smaller ports. An example is GM in the southern Rio Grande port and more recently at Suape in the northeast. “Smaller ports mean dedicated space, no congestion and tax incentives,” says Johnny Saldanha, VP global purchasing and supply Latin America, Africa and Middle East for GM.

Saldanha says that GM has a close working relationship with the port in Rio Grande and didn’t experience problems during the downturn. The port provides space for 5,000 cars and GM handles PDI services there. Saldanha adds that the number of calls by vessels such as K-Lines also remained steady. GM usually transports cars by vessel between Argentina and Brazil, before moving by road to São Paulo or farther north. It uses Rio Grande to ship vehicles from its Gravatai plant to Argentina and also to import 50,000-60,000 vehicles built in its Rosario, Argentina plant for the Brazilian market. For the Brazilian plants situated in São Caetano and San Jose, GM uses Santos to ship vehicles to Argentina.

But GM recently invested in setting up a dedicated terminal at Suape to import cars from Argentina and a single model from Mexico. The terminal has parking space for 1,600 vehicles and is expected to handle GM’s 10,000-15,000 vehicles in 2010. “It’s a win-win for us and the local economy,” Saldanha says.

Ford’s private port
Ford’s Miguel de Oliveira port terminal, which opened in October 2005, is located 40km from Ford’s plant in the Camaçari Industrial Zone. It handles all of Ford’s imported and exported vehicles in Brazil, according to Rogério Feliciano, manager of Ford’s logistics for Latin America. The terminal, which works exclusively with Ford, stands between the Todos os Santos Bay and the Aratú Bay in Bahia state. The terminal is responsible for exporting vehicles such as the Ecosport and the Fiesta, both produced at the Camaçari plant, and for importing vehicles such as the Ford Ranger, Edge, Fusion, Transit and Focus.

Ford’s port handles large vessels that export Camaçari’s production to countries such as Mexico and Argentina. The terminal’s pier is 195 meters long and 26 meters wide, with a pier-side depth between 12 and 14 meters, allowing ships up to 200 meters long to moor. The terminal holds up to 6,000 vehicles and its yard also contains a tracking system to manage and locate cars.

The Miguel de Oliveira terminal uses ten loading stalls with ramps that allow about ten trucks to be loaded or unloaded simultaneously. Feliciano says that the location, infrastructure and operational processes help Ford to reduce transfer time to and from the plant as well as to lower the number of trucks needed in urban areas. Feliciano says that security is of extreme importance. The terminal installed a 24-hour closed circuit television system with 16 cameras, including a thermal sensitive camera, for around-the-clock monitoring of yards, piers and administrative facilities. The terminal also has several watchtowers.

Feliciano adds that the main savings are related to storage and quality resulting from the improved operational practices. For example, by handling PDI within the terminal, Ford ensures first generation equipment is used and that personnel use standardised procedures.

Although Ford saw a significant reduction in exports in 2009, these were partially offset by an increase in imported volumes. At a 10% reduction, the relative stability in the volumes means that there is no immediate requirement for an expansion in the port’s current infrastructure, Feliciano says.

Brazil’s deep south
Luiz Alberto de Paula César, director of business development at Administração dos Portos de Paranaguá e Antonina (APPA), the port authority at Paranaguá, says that the port was on track for continued growth before the global crisis. It had revenues of over $700m in car exports and $872m in imports in 2009, compared to exports of $938m and imports of $1.1 billion in 2008.

César adds the port worked closely with OEMs such as Renault-Nissan, Audi and VW to fight off the slump in volumes caused by the economic downturn, including improving facilities and infrastructure last year. Paranaguá shipped 67,921 units of which 33,219 vehicles were to Germany, the top importer; it sent 18,406 to Argentina and 7,115 units to Canada. Meanwhile the port imported close to 68,000 cars of which 48,705 units came from Argentina, 16,481 units from Mexico and 3,000 from Germany.

According to César, with a capacity of 11,000 vehicles per day, the port can move 2,000-3,000 cars through the port in around eight hours. Trucks unload cars at two patios: one for 9,000 vehicles and another leased by VW for 2,000 cars. To maintain volumes, César says that the port authority bolstered quality control by working closely with logistic service providers, OEMs as well as the port employees. The port invested BRL50m ($27 million) in trucks and expanded its storage capacity from 2,000 to 11,000 vehicles in 2009. César hopes that vehicle exports will make up more than 6% of the port’s volumes and 13% of its import volumes in 2010.

Argentina’s Zàrate
Across Brazil’s southern border, Argentina faces a tougher scenario. The country’s economy has faltered, the government has faced conflict with the Central Bank, while farmers regularly block roads and strikes are common. Cars sales growth failed to match Brazil in 2009 and as a result, the ports appear more cautious about a possible upturn.

Argentina’s National Automaker’s Federation (ADEFA) pegged vehicle sales at 487,142 units last year, down 20.4% compared with the 611,770 the year before, despite a stronger performance at the end of the year. Exports were more resilient, dipping 8.1% to 322,495 vehicles in 2009 compared to 2008, supported by Brazilian consumption. 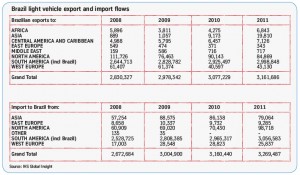 Zàrate on the Parana River is considered the primary player for vehicle imports and exports in the country. The terminal offers long-term storage, and is used by most OEMs including GM, Ford, Fiat, VW, BMW, Toyota, Honda and PSA.

Zàrate’s patio holds 46,000 mid-sized vehicles in a customs area of 20 hectares. The port also acts as a distribution centre for OEMs. Some OEMs, however, handle their own distribution. For instance, Fiat opts to cut parking fees by trucking cars to its own parking lot.

Moreover, Zàrate provides services such as PDI for 150 vehicles per shift with BMW a major customer. The company also provides foam covering for Ford and VW. Van Thillo says that calls by vessels dipped to 173 last year versus 200 in 2008. This is expected to recover this year to 190 calls. OEMs are asking shipping companies for more sailings, but the vessels often don’t have full loads to carry, he says.