Cargolux and Emirates team up to boost services 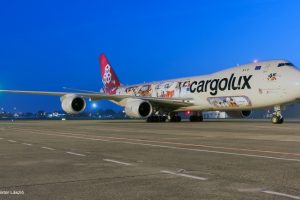 Air freight carriers Cargolux Airlines and Emirates SkyCargo are setting up an operational partnership that will include sharing aircraft and cargo handling facilities, as well as developing block space and interline agreements for use on each other’s networks.

It is the first such agreement between a main airline and a specialised freighter operator.

Emirates SkyCargo will use Cargolux’s Boeing 747F aircraft for customers with high and heavy cargo that requires nose loading or additional capacity. The use of the Cargolux aircraft will complement Emirates’ own fleet of Boeing 777 freighters.

Cargo from both Emirates SkyCargo and Cargolux will be handled at the same facility in Luxembourg when the former begins freighter operations to the country next month.

According to the companies, Cargolux will also increase the frequency of freighters to Dubai World Central (DWC) from its current three-times-a-week service to facilitate connectivity between the two cargo hubs. In addition, Cargolux freighters operating to DWC will be handled by Emirates SkyCargo.

The companies said that hub connectivity between Dubai and Luxembourg would strengthen the position of both locations as major logistics hubs and distribution centres in their respective regions.

The carriers will also develop interline agreements on each other’s networks giving each capacity to routes they do not currently operate on. Cargolux will have access to Emirates SkyCargo’s high frequency distribution network through the hold of passenger flights to over 150 global destinations in 83 countries, while Emirates will have access to main deck 747 capacity on Cargolux’s network.

“Cargolux is delighted to be working with Emirates SkyCargo on this agreement,” said Richard Forson, president and CEO of Cargolux. “Our supplementary capabilities allow us to develop service offerings that both of us could not provide on our own.”