Case study: the more the merrier for Volvo’s rail freight

Volvo Group has recently turned to a logistics provider to sell excess rail capacity on routes between Europe and Sweden. The multi-party arrangement is an example of how consolidating freight across industries may support more efficient rail services.

Transporting automotive material by rail is common for inter-plant movements, such as moving body, engine and transmission products to assembly plants. There is an inherent conundrum, however. Depending on the locations of an OEM’s powertrain and assembly network, moving finished components to assembly points could mean the return leg is empty save for empty racks or other limited material moves. Bringing more material into the mix can increase the load utilisation, however that would mean more touch points, complexity and longer overall lead times – factors that often work against rail transport.

However, commercial vehicle OEM Volvo Group has been exploring a number of concepts in its rail network in northern Europe that use third parties to sell excess capacity – with no impact on overall lead times.

For example, Volvo Group has recently adapted one if its most significant rail routes, referred to as ‘Train 8’, which runs ten times a week from a plant in Umeå, in northern Sweden, and the group's truck plant in Ghent, Belgium. The train service, which follows a circuitous route resembling the figure eight (hence its name), is made up of wagons with parts from Volvo Group plants in Umeå and Gothenburg, and the Volvo Car body component plant in Olofström, which all meet in the south of the country in Älmhult, where they are linked together for transport to the Volvo Truck and Volvo Car assembly plants in Ghent. Along the way, they pass through Denmark, Germany and the Netherlands, covering 2,500km.

The service has also benefitted from a recent RFID investment by the Swedish railway authority (read more here). 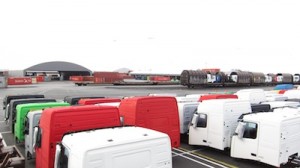 The Train 8 service is an historic and efficient linking of Volvo Group plants with those of Volvo Cars, even though the two have separate owners and logistics (Volvo Cars has developed an in-house logistics team, and no longer uses Volvo Group’s logistics management). The route has even been the beneficiary of a significant RFID investment by the Swedish railway, which has helped to greatly improve tracking and delivery accuracy along the route.

However, the problem with the service had been that only 10% of its load capacity was used on the return trip to Scandinavia. With such imbalance no longer sustainable, in summer 2014 Volvo Group inked a deal to sell the surplus capacity to Scandinavian Logistics Partners (ScanLog), a Swedish freight forwarder and logistics provider. ScanLog has in turn started to sell the cargo space to its customers, with retail heading to Sweden that ranges from industrial to consumer goods.

The intention is straightforward: use more empty wagon capacity northbound to Sweden so as to lower costs for both Volvo and ScanLog’s other customers. According to Anders Bergström, purchasing manager for sea, rail and air logistics at Volvo Group Trucks Operations, fewer empty miles also reduces emissions in the supply chain, which is an important consideration for the company's corporate sustainability goals.

"One of the main challenges was also to develop the solution without increasing the total rail wagon roundtrip time, nor to jeopardise the punctuality... this issue was solved without increased lead time and number of wagons in the system" – Anders Bergström, Volvo Group Trucks

In the new setup, Volvo Group offers empty capacity to ScanLog for the northbound return part of the rail journey; the logistics provider has also taken over responsibility for handling and crossdocking at a number of sites. Scanlog picks up various goods by truck from producers in Spain, France, Benelux and western Germany, which it tranships to Ghent for the train returning to Sweden. To consolidate and distribute products along the route, ScanLog has opened a new crossdock terminal in Älmhult for distribution in southern Sweden, which supplements an existing terminal in Hallsberg used for distribution to central and northern Sweden. 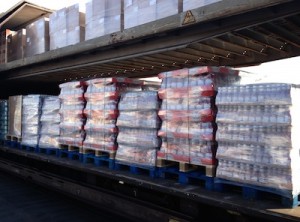 Green Cargo acts as the contracted rail provider to the Volvo Group for Train 8 and also provides shunting services locally in Älmhult and Hallsberg to ScanLog. Meanwhile, VGLS manages operations for the Volvo Group and does monitoring and follow-up for group cargo moving northbound and southbound.

In the past, VGLS (or Volvo Logistics as it was previously called) might have been involved in trying to include additional customer freight in such a service. But since Volvo Cars stopped using the provider, Volvo Group has restructured VGLS to focus primarily on group operations. Therefore, a 3PL like ScanLog is depended upon to find other freight, leveraging its customers across many industries. According to ScanLog, combining freight with Volvo means that it is able to quadruple departures to its own customers, offering daily service between Sweden and continental Europe during weekdays.

Bergström admits that the process hasn't been all easy riding, with negotiations necessary for a new business model, since Volvo Group is effectively ceding a large part of the network to ScanLog, as well as increasing shipment points. "In this specific surplus capacity project, one of the main challenges was also to develop the solution without increasing the total rail wagon roundtrip time, nor to jeopardise the punctuality, even if additional unloading places in Älmhult and Hallsberg were established in this new concept,” he tells Automotive Logistics. “Due to the commitment and high service within Green Cargo’s domestic rail network in Sweden, this issue was solved without increased lead time and number of wagons in the system.”

Getting everyone on board

This isn't the first time that the Volvo Group and VGLS have included other companies in filling excess rail capacity. In 2013, Volvo Group developed a similar solution for the rail transport of cabins between Umeå and Gothenburg. Under this arrangement, surplus capacity has been sold to logistics companies for the distribution of finished vehicles from Gothenburg to the north of Sweden. In practice, this means several car brands, which arrive at the port of Gothenburg, are transported by rail to the north of the country, says Bergström. 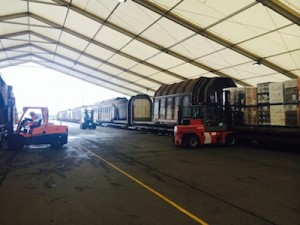 Bringing in other companies is increasingly essential for such rail services. In 2008, VGLS (then Volvo Logistics) launched a service between Sweden and Germany with DB Schenker, called ‘Viking Rail’. However, declining volumes, and the separation between Volvo Cars and Volvo Logistics/VGLS, led to the end of the service earlier this year, with most material now moving by truck or ferry (although some of the material on the previous services moves on Train 8). The key is that Volvo Group material on its own was not sufficient, and cross-sector collaboration has proved to be the most effective to increase frequency and utilisation.

"Volvo Group Logistics Services strongly believes in horizontal collaboration between transport providers and OEMs active in different segments,” says Bergström. “These partnerships can only be successful if a suitable business model is agreed, and an open and honest dialogue is established with the purpose and target to find win-win solutions for all parties in the logistics concept.”