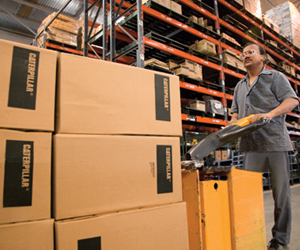 Ford has dropped out of this year’s annual list of the top 25 supply chain companies compiled by research and advisory firm Gartner. Last year it was ranked at 22, the first time it had made it into the top 25, and was the only passenger car manufacturer to be ranked at that level.

Industrial equipment maker Caterpillar dropped five positions to number 23 just in front of engine and parts maker Cummins. According to Gartner, Caterpillar’s ranking went down because of a significant downturn in the mining industry, which hit its financial performance.

Gartner compiles its ranking according to financial data and industry opinion derived from peer voting. For the financial half of the calculation, three KPIs from publicly available data are taken into consideration, including revenue growth, return on investment, and assets and inventory turns. Those numbers are prorated and weighted over the last three years.

Caterpillar's three-year weighted average revenue growth dropped from 23.4% in 2013 to 3.3% in 2014. To deal with the downturn, the company reduced inventory and avoided a build up of products.

Cummins, meanwhile, has been pursuing an end-to-end integration across its functions and business units according to Gartner and has been working on improvements in areas such as supply chain segmentation, supply network design optimisation and synchronised business planning.

“Improved talent management is another priority being driven by senior supply chain management,” stated Gartner in its report. “As a key player driving commercial and household energy consumption, Cummins is demonstrating leadership in environmental sustainability, and has won several industry awards in this area.”

Among the points recorded at last week’s conference that are of note for the automotive industry is that there are residual widespread distribution problems following the harsh winter in the US and Canada.

“Rail networks are congested and some shippers do not have alternative secondary transportation modes available,” noted Paul Lord, research director at Gartner Supply Chain Research.  “It is too late to fix this with inventory. All that can be done now is to review network configurations and add these constrained lanes to the supply risk register for review and mitigation through the S&OP process.”

Lord also highlighted the impact of hours of service rules, quoting one logistics representative in the packaging side of the industry who was anticipating a near doubling of long haul motor freight rates due to shortages in drivers and restrictions on hours.