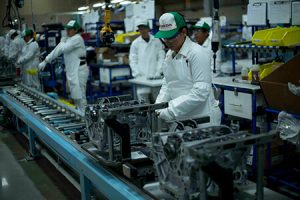 Honda has confirmed that production of the Fit and HR-V models at the Celaya plant in Mexico will remain suspended this month, after the facility was hit by flooding at the end of June.

The impact of the flood on the production of an engine component at the transmission facility in Celaya, which is exported to the US, has also meant assembly of the Insight model at the carmaker’s Indiana plant is suspended through August, added the carmaker.

Honda de México said that now that the flood waters had receded, it was investigating the extent of damage to its facilities at Celaya, where vehicles are produced for both domestic and export markets. In addition to inspecting equipment, tooling and systems, the OEM is carrying out cleaning and preparing to restart assembly there.

Although engine and transmission production restarted on July 9, the Celaya complex also stamps structural parts, including a critical engine component that is sent to the Indiana plant located in Greensburg. The Indiana plant also makes the Civic and CR-V but production of these is unaffected, said the company.

The carmaker said it expected the investigation into the extent of damage at Celaya to take “several weeks” to complete and it remained to be seen whether production of the Fit and HR-V would restart in August.

The Honda HR-V is also produced at Honda’s plant in Guadalajara, Mexico, about 160 miles west of Celaya, which has not experienced any flooding. Production of the refreshed 2019 Honda HR-V is already underway there.

Honda said its focus on maintaining product quality would not be compromised by the incident, and that its employees were all fine and ready to return to work.