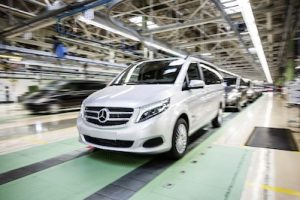 Mercedes-Benz has expanded its contract with Ceva Logistics for services at its van plant in Vitoria, Spain, which makes the mid-size Vito van and the V-Class MPV (pictured).

Ceva has been working with Mercedes-Benz in the Iberian region since 2012 but started providing services to the carmaker in Vitoria in February this year. Those services included the unloading of trucks carrying inbound material and the storage of parts for the body shop. Following an additional tender this autumn, Ceva is also now sequencing component car sets and delivering them to the assembly line.

The length of these contracts has not been disclosed.

"During our four-year collaboration in Iberia we have been able to offer them a consistently high standard of service in line with the solutions we offer in other locations,” said the logistics provider’s managing director, Marco Galbusera. “This new contract further enhances our relationship as their logistics partner of choice, and highlights the customer’s satisfaction with performance at its production centre at Vitoria.”

Mercedes-Benz Vans has seen an increase in van sales this year – up 13% to 85,200 vehicles by the end of the third quarter with revenues up to €3.1 billion. It added a third shift at the Vitoria plant last month to meet demand. The company recorded strong growth in France (+16%), Spain (+14%) and Italy (+40%), while in Germany it saw a 19% rise in the third quarter. Sales in Eastern Europe were down 19% because of weak demand in Turkey and Russia.

According to the vehicle maker, Vitoria is Mercedes-Benz Vans' first plant to systematically identify and locate almost every load carrier in the body shop using RFID technology. This use of RFID has accelerated the production process, according to the company.