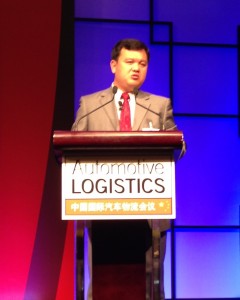 Slower growth but higher quality products, logistics and service. For the third straight year, speakers at the Automotive Logistics China conference – including Liu Xilong, deputy director of the economic operation bureau for transport and logistics at China’s influential National Development and Reform Commission (NDRC, pictured) – have pointed to the changing economic model in China and its impact for the automotive and logistics sectors.

In the first quarter of 2015, China’s automotive sales growth slowed to a 3.9%compared to 2014. While there is an upward trend compared with last year, China’s economy is slowing down its speed of growth. The question for automotive logistics in 2015, and beyond, is whether manufacturers and logistics providers can adapt their services, including meeting demand for higher quality and adapting to changing technology trends, even while maintaining productivity and cost reduction targets.

From January to March, China sold 6.15m vehicle units, according to Xiao Zhengsan, general secretary, Chinese Automobile Dealer Association, putting the carmaker on pace for a mild increase on the nearly 24m vehicles sold in 2014. In the first quarter, passenger car sales accounted for 5.3m units.

The slower growth is partly the result of a slowdown in GDP growth, which was also revealed today to be 7% in the first quarter - the slowest growth since the financial crisis in 2009. It is unlikely to be any higher than that this year, a significant slowdown compared to the double-digit growth to which the Chinese economy grew accustomed over much of the past three decades, until the Chinese government began efforts to rebalance the economy since 2013, according to Cai Jin, vice president, China Federation Logistics & Purchasing.

Sales have also been restrained by restrictions on new car purchases in a number of tier one and tier two cities, said Xiao. As a result, used vehicle sales have surged, growing at least 16% and surpassing 6m in 2014 according to surveys by the Chinese Automobile Dealer Association – although Xiao admitted that the actual number, including smaller markets, was probably closer to 9m units.

Despite the downward pressure, growth in new vehicle sales remain and there have been improving signs in recent purchasing and manufacturing indices.

Cai Jin predicted that China’s growth rate would be be maintained. He pointed out that the country is currently going through a period of massive economic restructuring, which will continue in the years ahead. Tertiary, private industries now account for between 48-50% of the economy, and are likely to top 50% this year. Jin said, “From that perspective, we have seen tangible and rapid progress delivering positive impacts on economic growth. This ensures we have adequate jobs created to maintain economic stability.”

For the automotive logistics industry, along with the huge process of economic restructuring, companies need to address overcapacity issues, speakers revealed. There have already been rigorous efforts in this regard, and targets so far have been completed ahead of schedule, said Jin.

Cai predicted says there is only one way out, and that is to reduce overall logistics cost. As part of China’s rebalancing, the industry should no longer seek to grow only in quantitative terms, but also in quality, he said, echoing the economic policies and messages of China’s central government.

The path towards transparency and openness

Liu Xilong, at the NDRC, said that the key to success continues to be China opening up its economy and industry. “We’re moving into complicated territory and it’s a difficult time. We must stick to openness and open economies to the rest of the world to embrace the diversity of the world economy and praise openness in the domestic economy,” he said.

To that end, Liu said that the Chinese government is making moves to show its commitment to international cooperation, including the River Delta improvements, and its “One Belt, One Road” project that includes improving rail and multimodal logistics links between China and Central Asia, for example.

Xilong also emphasized a move towards greater market transparency and more competition in the logistics sector. “Chinese policies will be committed to making an open market so that both domestic and international companies can compete with each other on a level playing field,” he said. “The message I’m giving is that the logistic market in China will be more open, compliant, transparent and stable in the future.”

Logistics development plans are also in the pipeline. Projects that will be launched in the future include developing distribution centres, multimodal distribution, and the development of platforms of 3PL providers. The Ministry of Commerce is also working with Chinese railway companies to develop multimodal routes connecting ports and rail.

Xilong added, “Automotive logistics is one of the stars of the past few years. Looking ahead to the next few years, we have many mechanisms being placed, including ministerial meetings, and continuous efforts will be made to mobilise and make full use of policies, and lend a helping hand to a better, more sound, more open, more transparent growth of automotive logistics.”

The conference revealed that these plans are not going un-noticed: Magnus Ödling, project leader for inbound China at Volvo Cars, said that he was encouraged by the proposed logistics developments and moves towards market openness and transparency. “We certainly like the sound of a more market-led industry, with more transparency and multimodal options,” he said.

However, despite the general feeling of positivity, the outlook isn’t currently as bright for dealers in China. Xiao admitted that the outlook for many was currently gloomy. “Dealers are having a hard time, whether it’s high inventory, production chain issues, or that the eco-system is getting worse. Expect to see more reporting of these issues this year.”

For the first time, said Xiao, China’s new vehicle market was becoming more of a “buyers’ market” after years in which sellers had the advantage. Rising inventories and discounts are starting to hurt dealer and OEM profits, he said.

Nevertheless, Xiao said that China’s automotive industry still had plenty of potential, including more scope for automotive financing (which accounts for just 14% of sale in China, compared to 80% in the US and Europe), as well as more lease options. He also suggested that new opportunities would be opened up to both dealers and logistics providers by the growth of e-commerce, connected vehicles and autonomous driving.

“We shouldn’t be afraid of the changes faces dealers and the automotive industry, but we have to face them,” he said. “The e-commerce players will change the industry’s mentality; providers and dealers will have to reconsider what the future models will be.”

The Automotive Logistics China conference is taking place at the Hilton Hongqiao in Shanghai until Thursday April 16th. Video recordings of the main sessions will be available on the programme page.

Rachael Hogg and Christopher Ludwig contributed to this report.