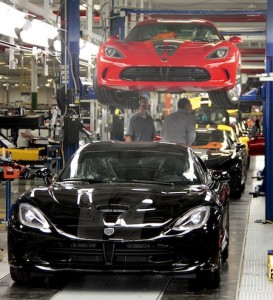 Chrysler has announced that it will shut its Detroit assembly plant for the SRT Viper sports car for two months from April 14 in an effort to bring inventory in line with demand for the car.

Sales of the Viper have been below initial expectations since the new model was introduced at the beginning of last year. The carmaker sold only a third of what was expected through 2013, at just below 600 vehicles. In the current year it has sold 158 Vipers, of which 67 were sold in March.

“Chrysler Group confirms that its Conner Avenue assembly plant will be down, beginning the week of April 14. Production will resume the week of June 23,” said the company in a statement. “Ninety-one UAW-represented employees will be laid off during this time.”

In October 2013 Chrysler reduced its daily production output, from an average of nine vehicles a day to six. The company said that during the shutdown it would continue to deliver sold orders.

“We do not anticipate any adjustments to actual production once the plant reopens,” the spokesperson added.

Overall the Chrysler Group finished the month of March with 71 days supply of inventory (526,000 units). The company said it did not report supply numbers for individual models.