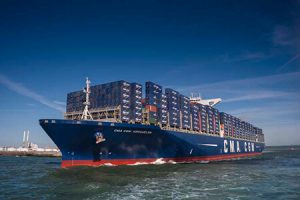 International container shipping company CMA CGM has agreed to acquire a 25% share of third-party logistics provider Ceva Logistics, estimated to be worth up to 450m Swiss francs ($458m), in convertible bonds.

The deal remains subject to regulatory approval, at which point the bonds can be converted into shares. The deal is also subject to Ceva’s initial public offering on the SIX Swiss stock exchange, which it applied for on April 20.

“With this proposed investment in Ceva, CMA CGM is making a significant move, in line with its development strategy,” said Rodolphe Saadé, chairman and CEO of CMA CGM. “Ceva is a major player in the logistics business, which is closely related to the shipping industry. Together, the two companies will also explore possible cooperations, allowing us to propose an ever more differentiated and qualitative offering while integrating services beyond maritime transport.”

Those hopes for collaboration with Ceva look limited at this stage, according to Transport Intelligence analyst Thomas Cullen.

“CMA CGM is still a minority shareholder and any deeper relationship would imply a higher proportion of ownership,” said Cullen. The most obvious overlap is in the sea freight forwarding business he said. “However, any agreement would have to overcome the fact that, essentially, CMA CGM is a supplier of Ceva Forwarding,” he added. “It is not unknown for a shipping company to own a forwarder, after all Maersk owns Damco, but here the synergies between the container shipping business and the forwarder have been so far, limited.”

That said, according to Cullen CMA CGM could be thinking along the lines of some of the other container terminal companies, who seem to be constructing in-land transport and warehousing capabilities. “Ceva could certainly be the basis for developing such capabilities in Europe, South East Asia and China,” he said.

CMA CGM Group has 504 vessels and serves over 420 of the world's 521 commercial ports. It recorded $21.1 billion in revenues last year. Amongst its global subsidiaries are APL, based in Singapore, and CNC in the intra-Asia market.

Ceva posted revenues of $7 billion in 2017 and is ranked as the world’s fifth largest contract logistics provider. It is also ranked tenth globally in the freight forwarding business. Automotive is one of five main sectors for which the company provides logistics and freight forwarding services, and accounts for 25% of its revenue.

The company said it expected revenue growth of approximately 5.3% in constant currency in the first quarter, over the same period last year, driven by higher freight rates and moderate volume growth in freight management and solid growth in contract logistics.

Ceva Holdings will be merged with Ceva Logistics, which will become the new holding company for Ceva Group simultaneously with the IPO.