Concerns over global trade as Trump secures US election victory 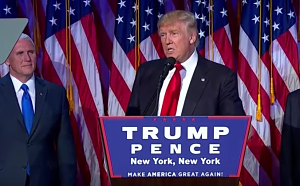 Donald Trump’s surprise victory over Hillary Clinton in the November 8th US election has created serious concerns over the future of the country’s major trade agreement with its neighbours, which has become such an important part of many carmakers’ and tier suppliers’ automotive supply chains.

Markets and currencies including the Mexican Peso and Canadian dollar weakened substantially as Trump’s victory grew clearer, with particular concerns over his campaign rhetoric around eliminating free trade agreements and threatening global production networks. They did, however, recover some ground from the lows earlier in the trading day.

Despite lagging behind in the polls for most of this year, Trump defied the odds by securing the 270 electoral votes to claim the US presidency. His Republican party also retained the Senate and House of Representatives, giving it control of both houses of congress.

Throughout his campaign, Trump criticised some of the country’s trade policies and historical trade agreements, notably the North American Free Trade Agreement (Nafta) and the pending Trans-Pacific Partnership (TPP), saying he would renegotiate or even eliminate them, if elected.

This will obviously alarm vehicle manufacturers with operations in the Nafta region. Earlier this year, Nissan North America vice-president of purchasing, production and supply chain, John Martin, told Automotive Logistics: “The federal government is very aware of the importance of cross-border trade, and border security and customs generally work very well, despite public perceptions. The Nafta system overall is very effective, and we get a lot of benefits moving vehicles and material by rail across the border.”

While the efficiency of Mexico’s production and logistics is a competitive push for American operations, the North American network is also increasingly integrated, meaning barriers to trade could harm both sides.

The election result is obviously of particular concern for automakers and component suppliers who are heavily invested in Mexico, given Trump’s campaign threat to build a wall across the US border with its neighbour.

According to the Centre for Automotive Research, automakers including BMW, FCA, Ford, General Motors, Honda, Hyundai, Mazda, Nissan and Volkswagen have announced more than $24 billion in Mexican investments since 2010. In 2014, Mexico exported $87.1 billion worth of motor vehicles, vehicle bodies and trailers and vehicle parts to the United States.

“Mexico has captured 9 of the last 11 announced new assembly plants for the continent since 2011, and is expected to significantly increase light vehicle production to more than 5m units by the end of the decade” noted the Centre’s July report. In 1993, prior to Nafta, Mexico produced just 1.05m light vehicles.

Speaking in his final campaign speech in Michigan, birthplace of the US automotive industry – which voted Republican in the election – Trump again addressed the topic of cross-border trade.

“They’re ripping your auto companies apart, they’re taking your jobs, they’re closing your plants and moving them to Mexico and other places,” he said.

He also repeated a previously stated intention to bring in a 35% tariff on finished vehicles imported into the US from Mexico and other countries, as well as renegotiating Nafta.

“If we don’t get the deal we want, we will terminate Nafta, get a much better deal for our workers and our companies. We will also immediately stop the job-killing Trans-Pacific Partnership,” he said.

In the early hours of Wednesday morning as the election result was becoming clear, the Mexican Peso hit its lowest level against the US dollar since the post-Tequila Crisis period in the mid-nineties, when the country was nearly bankrupted.

As a major auto manufacturer, Canada’s government has also voiced its concerns over a Trump presidency.

Ontario Premier Kathleen Wynne told the BBC: “If we have a partner south of the border that isn't interested in getting a softwood lumber deal or making sure we continue our relationship with the auto sector, that's very, very bad for the province and it's bad for the country.”

President-Elect Trump has also suggested imposing tariffs on Chinese trade, which would be very significant to the global logistics market.

China is currently the US’s largest goods trading partner with $598 billion in total goods trade during 2015. US exports to the country totalled $116 billion while imports totalled $482 billion.

Protectionist worriesIn a research note released before the election result was made clear, analysts at investment bank Jefferies highlighted the risk of protectionism on global trade.

Citing The Economist, the research note said that this year, global trade was expected to fall below global GDP growth. “The main drivers behind the slowdown are cyclical factors and a decline in outsourcing of production, according to recent academic research,” stated Jefferies.

“We believe there’s a risk both factors may continue to negatively impact global trade following the US election result, which is expected to lead to increased protectionism.”

As was the case earlier this year, when the United Kingdom voted in the ‘Brexit’ referendum to leave the European Union, Trump’s victory may result in some historical trade barriers being resurrected.

In another rally speech just before the election, Trump himself described his potential victory as a “Brexit-plus-plus-plus”.

How easily such barriers could be put in place is not yet clear, however. In what seems to be a similar clause to the Article 50 the UK needs to invoke to leave the EU, Nafta’s Article 2205 allows any of the three parties to withdraw after initiating a six-month notice period. A Forbes article following Trump’s initial remarks about Article 2205 in July, however, suggested Congress would probably have to approve the 2205 notice, rather than Trump making the decision unilaterally.

Mexican economist Luis de la Calle told the publication: “Under the US Constitution, Congress has the last word on international trade. It would be unprecedented for the US to withdraw from a treaty ratified by both houses.”

Trump did not allude to such issues in his acceptance speech, instead concentrating on the need for the US people to pull together after what was a very bitter election campaign.

“It is time for us to come together as one united people,” he said. “For those who chose not to support me in the past, I am reaching out to you for your guidance and your help so that we can work together and unify our great country.”

The impact of Trump's presidency on US-Mexico trade and logistics will be discussed at the Automotive Logistics Mexico conference, January 31 - February 2nd in Mexico City.