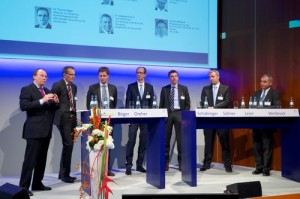 The growth in contract logistics continues apace, but the length of contracts issued by manufacturers to service providers is too short, as is the lead time offered to implement the services needed. This is a problem exacerbated by the complexity of the services required.

This was the view contested during a dedicated session on the contract logistics industry as part of last week’s International Supply Chain Conference in Berlin, Germany, organised by BVL International.

A further problem in the provision of contract logistics is the volatile fluctuation of volumes once services are established. According to Frank Straube, executive director at the Institute for Technology and Management and head of the logistics faculty at Berlin Technical University, that fluctuation can be anywhere between 50%-80%.

Straube was moderating the session, which involved executives from BMW and Robert Bosch, as well as logistics providers DB Schenker, BLG Logistics and Kuehne + Nagel. It was clear from the discussions that many logistics providers felt that tenders did not reflect the reality of the day-to-day provision of the services they demanded which, along with tight budget margins, affected the flexibility they were able to offer. However, this flexibility was a prerequisite for the OEM customer, and the compromises fought over led to a differing view of the resulting services.

“The question is: do you believe that your partner is satisfied with what you are doing?” asked Straube. “If you ask service providers, around 80% will tell you they believe their customers are satisfied, but when you ask the customers, it is more like 52%.”

Dr Thomas Böger, board member for Contract Logistics/SCM at DB Schenker Deutschland, said that tender deadlines were getting shorter and the full details of the service required was not made visible at the beginning; this affected the stability of the business, he said.

“Project implementation and fine-tuning comes later but the tender deadline gets shorter and shorter,” said Böger. “These are the underlying conditions of where we are working now. Business is not stable […and] details are not available up front.”

This was also something highlighted by BLG Logistics’ board member Andreas Wellbrock, who added that the deadlines for tenders were “sometimes a bit tricky and difficult to deal with”. Concerning the lifecycle of the product in the tender documentation, Wellbrock stressed that this needed to be discussed at the beginning of the project for a reasonable and amicable compromise with the customer.

“It is about achieving a development partnership,” said Wellbrock. “We want to know where our customers are headed strategically. When we can assess that, then from the point of view of the supply chain we can support them in their endeavors and we can talk about automation and more technology – more innovation that can be integrated into the project. We need a steady run up curve to a tender to achieve this, not a sudden one.”

Length of contract
In terms of the length of contract, the great majority average three years, said the experts. With the first year spent in getting the service fully up and running, and the second in gaining stability, service providers find themselves back at square one when it comes to the third year, as it is spent worrying about securing contract renewal. Böger said this left no time for developing innovations in response to the realities of the contract and no time for developing cost savings in an industry defined by tight margins. Added to that, sudden changes to the project mean that tensions could develop in the business relationship.

BMW’s vice-president of foreign supply, Dr Dirk Dreher, agreed that in the past manufacturing logistics was defined by shorter contracts, which led to dissatisfaction on both sides. However, he said the company had moved forward and now offered contracts of up to eight years, though he admitted that there was still more that needed to be done in terms of cooperation.

Dreher highlighted the need for flexibility in service offering from its providers during the duration of the contract, but admitted that the advances BMW had made in terms of transparency in the production system had left its service partners lagging.

“We have developed much further towards production systems and labour organisation, with responsibility onsite and high transparency, including problem solving,” he said. “Now we feel that we have sort of left our process partners behind and that can break the chain. We need to be closer in the development of processes with our providers. Only when the chain is strong will we achieve short throughput times and meet our overriding aims of cost reduction, flexibility, quality and sustainability.”

Dreher said that in the tender phase it is essential not to write a contract down to the smallest detail because it was inevitable that things changed according to the market.

Flexibility among service providers was also important for Volkswagen. “The flexibility of service providers is a major reason to outsource processes,” said the company’s head of spare parts logistics, Markus Edelmann, who pointed out that there were certain processes that were difficult to predict.

Dreher added that there was also a need for greater modularity when drawing up a contract. “We expect the solutions are scalable; a process must be able to reflect that,” he said. “These are the variables. If we move toward lean principles together, we can make a great leap forward.”

At the end of the day, speakers pointed to greater dialogue with a long-term view.  This included the joint engineering and standardisation of production systems, which would ensure seamless processes between providers who were included from the beginning in the process.

“We need to share information and planning,” concluded Straube. “Don’t stop the competition, but we have to rethink in a bigger context.”