Counterfeit service parts in China on the rise 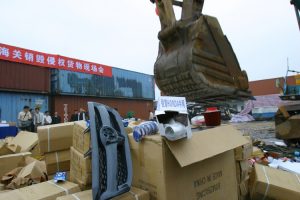 A new report from Ipsos Business Consulting (IBC) warns that the market for counterfeit automotive service parts in China is set to grow, along with the country’s overall automotive industry growth.

According to IBC, China's automotive components sector is set to achieve annual growth of 20% for the next five years, driven by demand for new cars and a growing secondary market.

“The aftermarket segment will become the main outlet for automotive parts as the average age of vehicles on the road continues to rise, and the current total car population has already surpassed 100m,” said the consultant firm. “The counterfeit auto parts market, already the world's largest with a current value of about $40 billion, will only increase as the overall market grows.”

Compared to producers of fake medicines or food, manufacturers of counterfeit auto parts, which the report acknowledges may also have fatal consequences, have not received serious punishments. At the same time, a large number of unregistered component makers are flooding the market with counterfeit products.

“As the automotive vehicle fleet in China continues to grow at a fast pace and maturing in the process, the aftermarket offers an ever increasing source of profitability,” said Klaus Paur, global head of Ipsos Automotive. “Protecting this business has become a top priority for parts manufacturers to ensure sustainability.”

The Ipsos report went on to observe that as demand continues to rise for vehicles and service parts, so too would the opportunities for manufacturers.

“Foreign-invested enterprises currently account for about one-third of the parts market's output,” said the report. “They are expected to consolidate this position given foreign firms’ more stringent IP protection practices and their greater affinity for mergers and acquisitions, which will be a key growth strategy.”

The situation is not exclusive to the aftermarket. Earlier this year Aston Martin was forced to recall more than 17,500 of its vehicles following the discovery that Shenzhen Kexiang Mould Tool, a Chinese subcontractor that moulds the affected accelerator pedal arms, was using a counterfeit DuPont plastic.