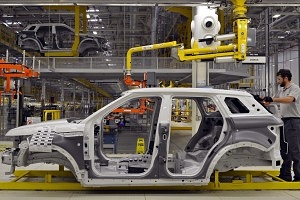 JLR opened its 750m reais ($215m) manufacturing facility last June. It is the first wholly-owned manufacturing plant the carmaker has set up outside of the UK (its plant in China is a joint venture with Chery), and the first automotive facility opened by a UK-based carmaker in South America.

The production line-up includes the Range Rover Evoque and the Land Rover Discovery Sport. JLR is the market leader for mid-sized premium SUVs in the Latin American country.

Under the contract, DHL Supply Chain will oversee all aspects of the supply chain, from warehousing through to sequenced track-side delivery.

The scope of work also includes the delivery of sub-assembled kits to the production line.

As reported by Automotive Logistics last year, the company already manages the collection and delivery of European-wide components to JLR’s UK plants and carries out receiving and line feeding at its three assembly plants.

“We’re delighted to have secured this new contract with Jaguar Land Rover which builds on our longstanding relationship,” said DHL Supply Chain’s director of business development for Brazil, Miquele Lioi.

JLR sources major components such as the seats, cockpits, exhausts, chassis and powertrain assemblies from local suppliers, including Benteler and IAC.

Goods arriving at the warehouse will be stored in 8,500 pallet locations. DHL will sort, move and sequence parts, as well as sub-assemble kits of up to 25 components, before shipping in sequence to the assembly line.

“In these challenging times, the automotive industry has proved that it can reinvent itself by identifying new market approaches, such as Jaguar Land Rover’s new plant in Brazil. In this case, sound logistics planning and a safe and efficient execution are critical to achieving business success,” said Lioi.