ECG anniversary: It was 20 years ago today… 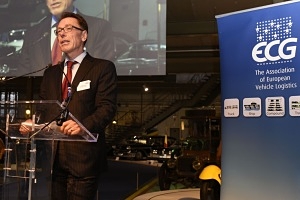 ECG president Wolfgang Göbel reflects on a celebration of the association's 20th anniversary and looks forward to a year of milestone events.

In late 1996, 25 people from 22 different companies sat around a table in a Cologne hotel and signed a paper agreeing to form a group to represent their industry. Thus were the beginnings of the European Car-Transport Group of Interest – or ECG – that would be established officially in early 1997.

At that time ‘groups of interest’ was the common terminology in Brussels for what today are called ‘associations’. We too rebranded recently as ‘The Association of European Vehicle Logistics’ but legally we are still ECG. So, for the many who ask ‘Why ECG?’, now you know.

It is interesting to note that most of the 22 founding companies no longer exist in the same form. I have talked before in this column about the ongoing process of consolidation in our industry; indeed most of the 22 have disappeared as a result of mergers and acquisitions and exist today as part of different organisations, most of whom are members of ECG. Despite this consolidation I was very pleased to record our 100th member company in the first quarter of 2017, which demonstrates that even if the number of players is reducing overall, those that remain see our association as an essential platform for the sector.

This was demonstrated in fine form on the evening of March 21st at Autoworld in Brussels, where we celebrated our 20th anniversary and welcomed some 250 people. Among them were many old friends, including all four of our previous presidents. Some 60% of the attendees were members and clients who had travelled from all over Europe to be with us.

In particular we were honoured to have the European commissioner for transport, Violeta Bulc, as a keynote speaker, and we welcomed some of the messages that she had for us (see p7). In particular, we support her challenge to us to embrace progress in digitalisation and the changes ahead. We are actually one step ahead of her in the challenge she laid down to lobby at national level for acceptance of e-CMR by those countries across Europe that have so far failed to sign up to this UN protocol.

Overall those present were very impressed with her ‘no nonsense’ attitude and heartfelt commitment to Europe and to see the transport industry as a whole maximize the use of technology and to work effectively for the benefit of all.

We also heard from Erik Jonnaert, secretary general of ACEA, the European automotive association, speaking on behalf of carmakers and truckmakers. He acknowledged the interdependency of his members and those of ECG and highlighted some of the future challenges the industry will face, such as the fall out from a ‘hard’ Brexit. Finally, and until very recently an OEM himself at Mazda, we heard from Jørgen Olesen. Predictably, for those that know him, Jørgen entertained us, not least with his rendition of a Danish birthday song, but also challenged us to make a difference in the next 20 years as well.

Also present that evening were a number of the original 25 signatories, who received framed copies of the founding document as a reminder of what they created all those years ago.

So much for the past – as Jørgen Olesen reminded us, it is the future that counts. As it stands, 2017 looks set to be our most active year ever. Along with ECG’s established activities, the new working groups covering digitalisation and capacity have generated a number of different cross-industry projects and sub-groups, which are proving very interesting. We have added some external resource to move these forward as quickly as possible and, especially in terms of standardisation, there seems to be a great deal of potential in these projects. I fully expect to be able to deliver positive updates from these activities in future columns.

In terms of our more routine activities I would like to remind our members and partners that, although we have been very focused on our 20th anniversary event, we are now running up to the annual Spring Congress and General Assembly, which will take place in Malta on May 18-19th. The Maltese hold the rotating EU presidency at the moment and we expect some high-level speakers from their own government as well as the European Commission. Registrations are open via the ECG website.

Malta will also see our latest course from the ECG Academy graduate. Registrations are open now for Course 11 of the ECG Academy and, as I write, the course is almost 30% filled. If you are planning to attend, or to send a colleague, make sure you book your space as soon as you can.

Finally, I can announce that the 2017 ECG Conference will be held, perhaps surprisingly, in Brussels for the first time. With a record attendance last year of more than 270 delegates we are finding it harder to find suitable venues where we can welcome this many people, but we have done so not far from ECG’s own offices. For now please block the date in your calendar and plan to be in Brussels on October 19-20th for Europe’s biggest event in finished vehicle logistics. I look forward to seeing you there.