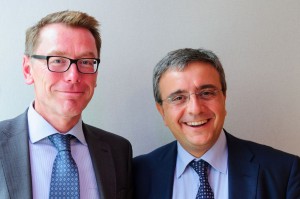 Leaving aside the capacity issues that many of you in Europe (and elsewhere) are dealing with in the aftermath of a busy first quarter, I want to look at how we can work smarter and more efficiently in the future, and focus on some key European and national legislation that would support those efforts.

This April sees ECG returning once again to the European Parliament in Brussels for our annual Dinner Debate, an opportunity to present ideas directly to key members of the European Parliament (MEPs), as well as the European Commission. This year we are continuing with the recent theme of ‘digitalisation’. Soon after the arrival of the current EU transport commissioner, Violeta Bulc, digitalisation became a word on everyone’s lips, but often, I suspect, with little understanding of what it actually looks like in transport.

We certainly don’t disagree with increasing digitalisation, as generally it makes our lives easier by eliminating time-consuming manual processes or by improving communication. Furthermore, we recently agreed in our kick-off ‘industry meeting’ that we would form a working group between OEMs and logistics providers to pursue this topic. However, some of the complex ideas and concepts you hear proposed are often for the future, and are barely tangible today. At ECG, we would like to see some real progress made on the basics. Let’s not talk about fancy ideas concerning driverless trucks or telematics until we have managed to let a truck drive across Europe without first having to print out a paper delivery note.

Digital solutions have been set out in Europe for each of the main transport modes, however they are all behind where they should be. For rail, the ‘e-consignment note’ is still to come, while for shipping, the ‘maritime single window’ is nearly a year over its target implementation date.

The situation on the roads is perhaps even more frustrating. The CMR protocol, a standard consignment note, is long established and widely used, but you may well not be aware that the e-CMR protocol also exists. Only nine out of 28 EU member states have so far ratified it and Germany, the largest market, is not among them. If part of your journey crosses any member state that has yet to ratify e-CMR, you have no choice but to use paper. What is more, some of these countries see no urgency in adopting it, and local officials even tell ECG that “no-one is asking for it”.

We must all make sure policymakers are made aware this measure is important, urgent and that the automotive logistics industry wants it. It is embarrassing when you consider that other sectors, like the courier industry, have been paperless for years, long using ePOD (electronic proof of delivery) for many types of deliveries. Meanwhile, we struggle to deliver the most valuable consumer products using paper notes.

More time to harmoniseMoving on to another topic, we recently launched a cross-industry lobbying task force, supported by most OEMs, to continue to fight for harmonisation of the allowable-loaded-length of car transporters in Europe. This is an issue you have seen many times before in this publication, but now we are focused on the review of the new EU Directive (2015/719) that will take place around four years from now.This task force’s objective is to use the national political clout of carmakers to work with the governments of individual member states to build a consensus around a specific form of words that would provide the solution we are looking for. Remember, we have never met any resistance to the concept of a harmonised loaded length; we were simply defeated by a lack of time and the necessary resources to achieve a consensus. Now we have time on our side.

Work has begun on this project. Renault Nissan’s Alliance Logistics Europe is building a database of contacts at national level and within national OEM associations, which are often powerful in lobbying terms. Meanwhile, ECG is collating all existing national legislation pertaining to car transporters and, where relevant, getting translations made. For the first time, we will have a single document containing all the rules affecting the road transport of finished vehicles in Europe, which we expect will set the benchmark for our discussions. With this combined group representing the industry, we can surely achieve the harmonisation we have long sought.

I cannot finish without ‘signing off’ – this is the last column I shall be writing in my role as president of ECG, since I will be standing down at the annual General Assembly in May. I am proud to hand over to my successor a strong and stable association which I know will continue to represent the sector effectively and which will continue to deserve your ongoing support. Ciao!