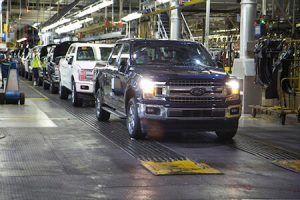 Ford has resumed production of the F-150 and Super Duty pick-up trucks at its facilities in the US, following inbound supply chain disruption caused by a fire at its components supplier Meridian Magnesium Products earlier this month.

The fire, which was followed by a number of explosions, took place at the Meridian plant in Eaton Rapids on May 2. The plant makes interior components for a number of major carmakers. Alongside Ford, the damage to the plant caused supply shortages for BMW, Fiat Chrysler Automobiles (FCA) and Mercedes-Benz, among others.

Ford had to stop production of the F-150 at its Dearborn and Kansas City plants, as well as Super Duty production at its Kentucky plant. All have now resumed operations, following efforts by Ford and its suppliers to refurbish and relocate tooling from the Meridian plant.

Those efforts included emergency shipment of a die press from the Meridian plant in Eaton Rapids to one of its other facilities in the UK. In a 30-hour operation, the 40-ton press was loaded onto an Antonov aircraft at Rickenbacker International Airport in Columbus, Ohio, and flown to the UK for delivery to Meridian's plant in Nottingham. Ford said parts produced in Nottingham would be flown out daily until production in Eaton Rapids returned to normal.

In all, Ford and its suppliers removed 19 dies from the damaged facility as well as carrying out refurbishment work there, which has allowed production of parts, including bolsters for the Super Duty pick-up, to recommence and also meant production of the Ford Expedition, Explorer, Flex and Lincoln Navigator, and MKT continuing uninterrupted.

“Faced with unexpected adversity, the Ford team, including our global supply partners, showed unbelievable resilience, turning a devastating event into a shining example of teamwork,” said Hau Thai-Tang, Ford’s executive vice-president of product development and purchasing. “Thanks to their heroic efforts, we are resuming production of some of our most important vehicles ahead of our original targets.”

As reported last week, the fire at the Meridian plant also caused disruption at FCA's Windsor plant in Canada, which makes the Chrysler Pacifica and Dodge Grand Caravan. FCA confirmed this week that production was now returning to normal, however.

The cause of the fire at the Meridian facility is still being investigated.