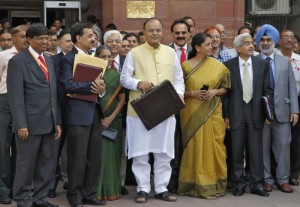 Following nearly 15 years of parliamentary wrangling, India’s new government has committed to introducing the Goods and Service Tax (GST) as early as this financial year, as revealed last week in the annual budget, presented by finance minister Arun Jaitley. The tax reform is expected to have major impacts on the transport and inventory of material and finished goods, particularly across state borders.

GST is an indirect tax that is imposed on all goods and services either produced in, or imported to, India. The application of an indirect single tax system is expected to eliminate varied, higher and multiple state-to-state taxes, including levies and double taxations. As far as the domestic automotive sector is concerned, leading figures have said the price of a particular model will be uniform across all states and a win-win for manufacturers, dealers and customers.

Jaitley added the GST will "streamline tax administration and result in higher tax collection for the centre and the states".

From a logistics efficiency point of view, however, the successful application of the GST is expected to allow manufacturers to centralise their inventory or create larger, regional distribution centres. For example, whereas today a carmaker in India is likely to have dozens of stockyards to distribute finished vehicles, in principle the GST would allow an OEM to consolidate more vehicles in one place, and then move full truckloads or trainloads to other states without paying tax and duty between states, as well as avoiding delays at octroi points. Octroi is a local tax collected on products brought into states for direct consumption.

GST has been discussed since at least 2000 in India, with various governments saying they were committed its implementation. However, previous attempts to push through the new system have failed because individual states feared not being adequately compensated by the central government for the loss of local taxes.

“GST’s opposition is rooted in its very nature of being a uniform tax system, something states resist as it somewhat curtails their control in this regard,” said Anil Sharma, senior research analyst at IHS Automotive. “It is difficult to arrive at a consensus as states governed by other parties often reject the tax split between centre and states, fearing loss of revenues.”

That said, Sharma pointed out that the current government, led by the BJP’s Narendra Modi, had a better chance of introducing it than the previous one as it has a majority, not just in parliament but also in several states.

“The view is of no hung parliament this time but a government with a handsome majority in the Lower House,” added Mayank Kaushik, who works as assistant general manager, logistics and spares, at India’s largest OEM, Maruti Suzuki, but who was speaking independently to Automotive Logistics. “With a few state assembly elections in the offing where BJP is expected to do well in non-BJP ruled states, I feel, GST may be implemented as early as within the current financial year, however, it may be with the exception of a few items.”

Export boosts, plus the chance for ‘hub and spoke’
GST will replace the current system of multiple taxes that include VAT, central sales tax (CST), excise duty and service tax. Under that system companies have to file returns to separate departments, which also means they have to maintain extensive documentation. GST promises to eliminate most of these indirect taxes and make life easier for them but it is unlikely to result in massive changes in the overall tax paid or the resulting price of goods and services, according to Sharma.

Among the things that would make a difference to the automotive industry is the amendment to the valuation of goods under the Central Excise Act. Last year the Society for Indian Automobile Manufacturers (SIAM) requested that this be addressed in parliament. Jaitley’s budget included a notification for amending the definition for excise valuation. This, according to SIAM, will help the industry avoid a lot of litigation and disruption in business practices.

SIAM also welcomed the establishment of the Export Promotion Mission.

“This will start the process of addressing issues of embedded tax in the price of export products which hurt our exports,” it said in a statement. “The main problem is the state level duties and taxes for which no remission is available today and it is expected that this initiative will be able to address the state duty issues.”

But the real change may well come for automotive logistics and finished vehicle logistics. In an interview last year with Finished Vehicle Logistics, Prem Verma, CEO for Tata Motor’s vehicle logistics subsidiary, TMLD, said that the GST would allow India to move towards a “hub and spoke” delivery network.

“The GST is expected to simplify many existing rules, which would streamline inter- and intra-state movements by avoiding regulatory checkpoints,” he said. “This new regime would promote giant warehouses, with their locations driven by operational efficiency rather than regulatory requirements.”

Verma and other experts also expect that GST could promote further use of multimodal and rail transport, especially since it would encourage the consolidation of vehicles for onward distribution across longer distances. In an interview earlier this year with Finished Vehicle Logistics, WWL India managing director, Gur-Prasad Kohli, predicted that GST would usher in significant rail growth. “The minute GST comes in you don’t need any more long distance trucking; you can shift down to move cars, trucks, buses and tractors by rail, stock them in one particular stockyard in the north, one in the west and from there you can do short lag distribution,” said Kohli.

Last year, India made moves towards reforming the use of rail for moving vehicles by encouraging more private design and operation of rail wagons for moving vehicles. The reform has so far encouraged Maruti Suzuki, as well as logistics operator APL Logistics Vascor to move ahead with investment in rail wagons. However, the GST introduction could be the next big step in helping rail to increase it’s share of finished vehicle transport, which is currently no higher than 5%. In an interview earlier this year with Automotive Logistics, APL Logistics Vascor chairman revealed that the one thing most important for the company’s success in India would be the GST (http://www.automotivelogisticsmagazine.com/finished-vehicle-logistics/reasons-for-optimism-at-apl-vascor-indian-rail).

However, it remains to be seen what compromises and changes would be made to any GST regime before it is put in place, and what impacts it would have on the networks of OEMs and logistics providers.

Investment in infrastructure
In his budget speech Arun Jaitley also said the government planned to promote investment in factories, roads and ports, something widely welcomed by the automotive industry. Included in the budget is a commitment of Rs. 11,000 crore ($1.8 billion) for the development of new ports, as well as for 16 new port projects to be awarded; the budget also committed Rs. 37,000 ($6.1 billion) for national highway development, with a focus on the northeast, as well as  Rs. 5,000 crore for warehousing and 500 crore for expressways along industrial corridors.