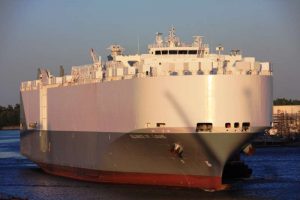 Global maritime transport provider Höegh Autoliners has confirmed that a fire in the engine room of the Alliance St Louis ro-ro carrier (pictured) has taken the vessel out of operation.

The fire broke out on Monday (January 16th) when the ship was in the Caribbean Sea, 130 miles south of Southwest Pass, Louisiana. It was extinguished by crew members. There were no reports of injuries to its 20-strong crew, or of pollution or of damage to its vehicle cargo, confirmed Höegh.

On Tuesday morning (January 17th), the vessel was running on emergency power and awaiting an ocean-going tug, before being towed back to Port Arthur in the US state of Texas, from which it departed on January 15th bound for the port of Jacksonville, in Florida. A spokesperson for Höegh said the vessel was expected to arrive back at Port Arthur on January 20th.

Port Arthur is just 20 miles from the Gulf of Mexico and offers trans-shipment services and inland connections to the US by rail.