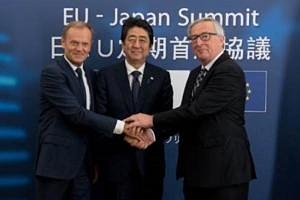 An economic partnership agreed in principle between EU and Japan that would see duties removed on a large amount of goods traded between two regions has been welcomed by the European Automobile Manufacturers' Association (ACEA).

Significantly, the agreement – which covers goods accounting for a third of global GDP – has attempted to address some of the concerns expressed by Europe’s automotive industry, including a request for a transition period to the proposed tariff-free environment on cars.

The agreement includes a seven-year tariff phase-out for all automobiles and an automotive annex designed to ensure continued regulatory convergence in the future as well as providing certain protections against sudden and substantial increases of imports, or the imposition of non-tariff measures by Japan.

Following the announcement of the deal, the European Automobile Manufacturers' Association stated: “ACEA’s members are global companies and international trade is an important pillar of the European automobile industry’s competitiveness, generating a trade surplus of more than €90 billion [$102 billion] in 2016.

“ACEA supports trade agreements that are free and fair, providing mutual benefits. The fact that the EU and Japan have announced a political accord to conclude negotiations for a free trade agreement is a positive signal for international trade.”

The proposed trade deal, which still faces hurdles in being approved both in Japan and across EU member states, is nevertheless considered to be a positive development in free trade, particular in light of ongoing Brexit negotiations and the protectionism in the US espoused by Donald Trump, who has pulled back from multi-lateral trade agreements, including the Trans-Pacific Partnership and Nafta.

The agreement ensures both Japan and the EU will fully align themselves to the same international standards on product safety and environment. This means European cars will be subject to the same requirements in the EU and Japan, and will not need to be tested and certified again when exported to Japan.

“With Japan now committing itself to international car standards, EU exports of cars to Japan will be significantly simplified,” said the European Commission.

It also includes an accelerated dispute settlement between the two sides specifically for motor vehicles, similar to the one agreed under the EU-South Korea trade agreement.

The agreement will also mean that hydrogen-fuelled cars that are approved in the EU can be exported to Japan without further alterations.

“Over the last four years, we have been through 18 tough but fair negotiating rounds and countless meetings at technical and political level, discussing everything from car parts to procurement, all the way through to beef and different types of cheese,” said Jean-Claude Juncker, president of the EU Commission, about the deal.

Tariffs on more than 90% of the EU's exports to Japan will be eliminated as the economic partnership takes effect. Once the agreement is fully implemented, Japan will have scrapped customs duties on 97% of goods imported from the EU.

“I can assure you that neither side is a naïve free trader. We have taken our time to make sure that any agreement is fair and benefits all sides. That is because both the European Union and Japan believe that open and fair trade can only happen with a level playing field and with clear rules of engagement,” said Juncker.

The European Commission said it hoped the legal revision of the deal and its translation into all EU official languages would be completed by mid-2018 and that the agreement would begin to come into force in early 2019.