Europe conference: Automotive manufacturers could hitch a ride to China 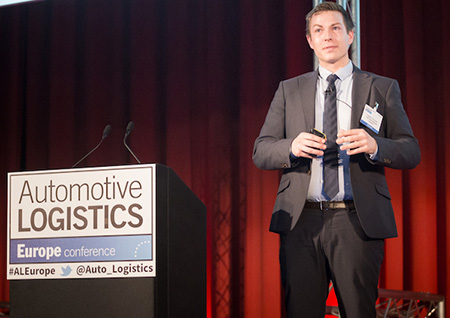 The automotive industry in Europe could benefit considerably from an imbalance of rail flows between the continent and China along the fast-growing China-Europe railway to ship goods to China in currently empty return capacity, according to one major Chinese logistics provider.

Vegard Synnes (pictured), head of key accounts for CDC International, a division of Chinese third-party logistics provider Changjiu Logistics, told delegates at the Automotive Logistics Europe conference in Bonn, Germany, last week that there were currently considerably more trainloads moving from China to Europe than the other way around, leaving plenty of spare capacity on return journeys.

According to CDC figures, 2015 saw 550 train services from China to Europe, while just 265 return services went from Europe to China. At the recent Automotive Logistics China conference, Zhang Xiaodong, professor of traffic and transportation at Beijing Jiao Tong University, highlighted a similar imbalance in 2016, with around 1,130 trains from China to Europe and 570 the other way.

For the automotive sector, however, the trade imbalance runs the other way, with Europe shipping far more vehicles and parts to China than China does to Europe. On the parts side, for example, European exports of automotive parts to China reached €9.8 billion in 2016; while Chinese parts to Europe were worth €3.3 billion.

“We think the parts suppliers in Europe have a chance to move more freight over to rail and have a positive impact on the imbalance,” said Synnes.

Europe's rail links with China have strengthened considerably in recent years, and look set for further growth, supported by continuing investment by the Chinese government into the One Belt, One Road economic trade plan. Recently, Volvo Cars made history by becoming the first carmaker to use the China-Europe rail link as a regular, weekly service to export cars from China to Europe.

The links are set to go well beyond trade between the EU and China, however.

Synnes outlined plans for setting up well-functioning rail systems through central Asia to the Middle East, to Europe through Turkey, as well as to Pakistan and India, and others in south-east Asia.

“The total amount of vehicles made in 2016 in this whole connected [Eurasian] region accounts for 74% of the global total,” said Synnes. “That means three-quarters of the global automotive industry stands to benefit from new shipping alternatives and reduced lead time; there will be increased efficiency from this better rail connectivity.”

One significant development is that CDC will set up a new rail route between China and Iran in September, bringing knockdown kits for Chery for assembly at its joint venture, which makes a version of the Chery QQ3.

Synnes pointed out that the Eurasian railway system was still at a relatively young stage and that there were still issues that needed to be addressed at border crossings, as well as a need for dedicated consolidation centres, more rail tracks and an electrified rail infrastructure. Nevertheless, good progress was now being made, and the route continues to attract considerable interest, including from the automotive sector.

Videos of the main sessions of the conference can be viewed again here.